Who impressed: MX2 US GP 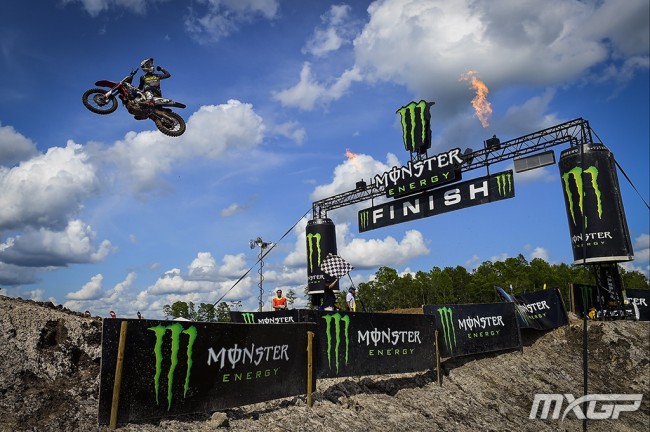 RJ Hampshire: What a weekend it was for the fast American with the legendary name! Hampshire won his first ever pro race in superb fashion and did it in his home state at the US GP! The conditions no doubt suited the Florida native but watching Hampshire fight tooth and nail in both motos for the win was a pleasure – he wanted it badly.

After a DNF due to a mechanical issue in the qualifying race, Hampshire still got great starts by pinning it around the outside to come out battling for the lead. Hampshire showed tremendous composure to recover quickly after a late crash in race one to hold the lead against Covington and again didn’t make any mistakes when the Suzuki duo were running him down quickly in the final few laps of moto two. Hampshire has shown this type of speed in AMA racing but this time he closed the deal in both motos showing superb mental strength and heart to do so. It was a great ride for the American.

Hunter Lawrence: The Aussie had the best race of his career in America and was oh-so-close to his first ever moto win in the second race. Lawrence started ttop five and fought with all he had as he closed down the race leader and kept his teammate behind him in the closing stages. This was Lawrence’s second podium of the year and he is really showing what he can do at the end of 2017. He could be a real threat for a world title 2018 and beyond – if he stays in MX2!

Lawrence said: “I caught up to Hampshire in first but we just ran out of time so I couldn’t pass him for the win. I’m really happy with my second overall, in my first time at an American GP. I’m just super happy with how the day went.”

Jeremy Seewer: It was a poor first moto for Seewer with crash and an off-track excursion meaning he only gained one point on Pauls Jonass despite the championship leader crashing at the start. But he made up for it in moto two, despite feeling under the weather after a cold and dealing with the humidity of Florida. Seewer didn’t quite get the start he wanted but pulled through the field, passing Jonass in the process and closing in on his teammate and Hampshire for the win. Five more minutes and Seewer might just have took the win but the Swiss flyer had to be content with third.

“It was a tough weekend and I’m just happy to finish it off with a third place”, admitted Seewer. “In fact it could have even been a win with a slightly better start and perhaps one more lap. I struggled a bit as I was sick coming into the GP and was actually quite lucky that I felt a lot better today, even if a few percent were missing.”

Thomas Covington: The American wanted to put a show on for his home fans and win his home GP and he almost got the job done! Covington had a good battle with Hampshire in race one and looked set to battle him for the overall win until the heat got the better of the American and meant he had to play it safe to keep his podium. But it was stil a good showing for Covington who also won the qualifying heat after admitting he gets frustrated at the lack of credit MXGP gets in the USA. Covington showed just why he deserves the credit and why he is a good pick for team USA.

Brent Van Doninck: The Belgian has had a hard season so far, and in the USA a top ten overall result have everyone a reminder of what Van Doninck is capable of. The sand suited him but the heat didn’t and the Belgian showed great determination to battle through the humidity to get a good result as the season draws to an end. Van Doninck is looking for a ride in 2018 but this results will hopefully help him get a solid seat for next year, that will allow him, injury withstanding, to show his true potential after flashes of brilliance the last couple of seasons.