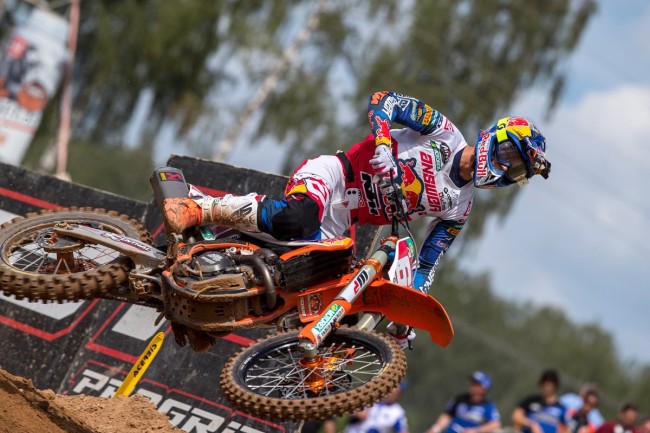 Jorge Prado: The Spaniard was back to his usual holeshotting self in Latvia. And despite Thomas Kjer Olsen getting the starts he still couldn’t do anything with Prado who pushed hard at the start then controls the race.

He might just be this eras Jeremy McGrath, a fantastic starter with marvellous riding technique who seems to be able to ride with lower risk and have more in reserve when he needs more.

The only man who is close is Jago Geerts, he has the speed and the technique but he can’t get the starts he needs to be right with Prado often to enough to have a chance of the battle. Prado is ticking every box right and and quite simply, he makes this sport look far easier than it actually is!

There are rumours Prado is looking into the USA next year but after both Cairoli and Herlings got injured in Latvia, Pit Beirer and co. might just want the flawless Spaniard to be their next guy in MXGP not just next season but for the long haul.

His maturity on the bike and calmness under pressure suggest he will learn to adapt to the big bike and the intensity of premier class and he should be a reliable title contender once he figures it out after his rookie season.

Bas Vaessen: The Dutchman has been quietly very good this year. A few unfortunate DNF’s have meant his results and his championship position aren’t always what they could have been but the speed on the bike is there on the sand and the hard pack.

That speed generated a fantastic fifth overall in Latvia and a nice reward for Vaessen who seems to have stepped up a level this season. The Hitachi KTM fuelled by Milwaukee rider is also in contention for the British championship in what is a very busy season but whatever he’s doing in 2019 is working!

Vaessen commented: “I had a good weekend at the MXGP of Latvia, which went some way to making up for the issues that we had in Russia. On Saturday we made some positive changes on the suspension and after a start crash in the qualifying race got all the way back up to 13. By Sunday I was ready to have a good day and after two mediocre starts I fought my way back into 6th in the first moto and 7th in the second moto for my first top 5 overall in two years. The team did a superb job on the bike and want to thank them for the effort!”