Who impressed: MX2 in Sweden! 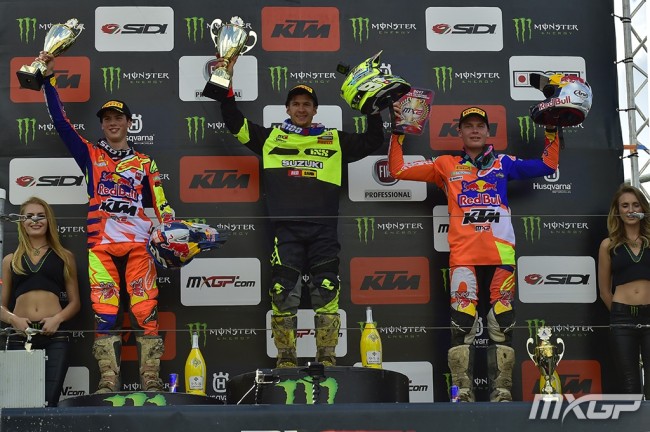 Jeremy Seewer: The Swiss rider had gone three GP’s without the overall win before Sweden but he got back to winning ways at the weekend. In the first moto he had to be happy with second as he couldn’t catch Prado for the win. The second moto was a much more intense affair as he was locked in a three-way battle for the lead at one stage.

Seewer was leading eleven laps of the second moto but lost it on the last corner by 0.055 of a second so even though he won the GP he will be kicking himself. Despite winning the GP he only gained four points on Jonass for the championship race so it’s going to be hard to win the title now! However, it was good for the Swiss rider to get back to winning ways as he has another GP overall victory under his belt.

Jorge Prado:  The last three or four GP’s have been going great for the Spanish sensation and he’s really starting to improve. One thing I’ve noticed about Prado is that he’s much stronger now than he was at the start of the year. At the start of the season during the last ten minutes he would have got tired and dropped back. However, physically he’s in a much better shape now which is pleasing to see.

Prado won the first moto of the day, he is really starting to figure the hard pack tracks out and that’s the one area he needed to work on.  Fifth in the second moto was good enough to give him second overall which is another very good result as he keeps learning every week.

Conrad Mewse:  That’s more like it from the talented Brit, see what good starts can do? Mewse was flying all weekend as he seemed to love the Swedish track. The start of the season was a bit of a struggle for Mewse but as the season’s progressed he has kept improving which is good to see. The Swedish GP was his best result in the MX2 World Championship of his career so far!

A fourth and an eighth in the moto’s meant he ended up fourth overall. He was the best Husqvarna MX2 rider this weekend too, that’s pretty impressive considering who his team mates are! Mewse confidence should now be sky high so hopefully he can continue to impress during the last three rounds of the series and then look to carry this form into the 2018 season.

Thomas Covington: The first moto isn’t worth talking about for the American as he had a crash at the start of the first moto. After being buried down in twenty-eighth he managed to get back to sixteenth which isn’t the best result in the world but these things happen.

The American turned it around in the second moto though, what a performance! He was in fourth and worked his way into second but at one stage it looked like Seewer had broke him. However, he put the hammer down and put in the fastest lap time of the race on the last lap to beat Seewer but 0.055 of a second. The determined American will now be looking forward to his home GP!

Darian Sanayei: Covington wasn’t the only American to impress in Sweden as Darian Sanayei had a good weekend on his DRT Kawasaki. The first moto was impressive as he was running a high pace and brought home his Kawasaki for sixth.

Sanayei had a solid second moto finishing in ninth. Two top ten results is a good weekend and that’s what he will want to do on a more consistent basis. Like Covington, Sanayei will be excited for his home GP up next.

Hunter Lawrence:  Well, there’s certainly no questioning the Aussie’s speed. In the first moto he was buried down in thirtieth on the first lap. He rode the wheels of his Suzuki to get back to twelfth. That might not sound all that impressive but he had the fourth quickest lap time of the race while battling through the pack.

It was good to see Lawrence finally get a good start in the second moto and surprise, surprise, he had no problems running the pace at the front. He was sitting in second behind his team mate and looked like he would challenge for the win but then unfortunately dumped it! That’s one thing he needs to cut out, those rookie mistakes but once he does that he could be a revelation as he’s one of the most talented riders in the class. Ninth overall doesn’t sound that great but he was one of the fastest riders this weekend. The Aussie will want on that podium during the last three rounds.

Davy Pootjes: it’s nice to see the HSF Logistics KTM rider back at the races in what was only his second GP back. After only picking up two points in Switzerland it looked like the Dutch rider might need a lot of races under his belt before the results start to come.

However, under the circumstances and the race time the Dutch rider has missed over the last few years due to injuries he was pretty impressive in Sweden. Eighteenth in the first moto was solid but in the second moto he ended up an impressive twelfth for fifteenth overall. Hopefully Pootjes can stay fit for the rest of the season and build on this, it would be nice to see him reach his potential as he is very talented.

Anton Gole: Since switching to the TM, the Swede has been in and around the points in moto’s but he was on form in front of his home fans at the weekend. Gole ended up seventeenth and sixteenth in the moto’s which is an improvement. It was also good to see the TM get good starts again!

Gole ended up sixteenth and the best Swedish MX2 rider as he pipped Alvin Ostlund. The Swede will be hoping to carry this speed into the remaining rounds of the season and hopefully break into the top fifteen sooner rather than later.