Who impressed: MX2 in Semarang 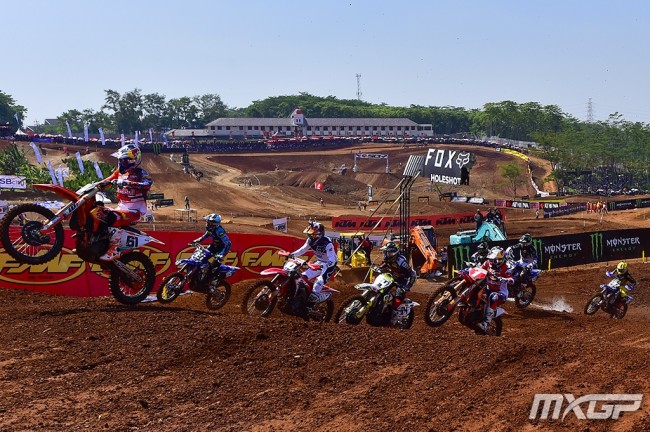 It was a weekend were Jorge Prado probably shouldn’t have won after getting caught and passed by Pauls Jonass in the first moto. However, Prado took advantage of his KTM team-mates crash in moto two to comfortably win the moto and the pair are now equal on points in the championship.

If you rewind back to a year ago then it’d be unlikely for Prado to win this GP as it was very hot and the track was very hard packed, that’s something Prado struggled to deal with 12 months ago. It just goes to show how hard the Spanish talent has worked over the winter with Claudio de Carli and it’s working wonders. The Championship momentum is with Prado right now – it’s going to be very interesting who walks away from Loket with the red plate.

If there was an award for the most improved rider of the year then Calvin Vlaanderen would certainly be right in contention.  Before this season, Vlaanderen has showed us glimpses of what he could do but has never really been a consistent top five guy but this year he’s exactly that.

The move to the HRC Honda team has done him the world of good and it looks like the Honda is finally sorted out, this is the best MX2 machine they’ve had in years. Vlaanderen despite a small crash in the first moto still did enough to get back to fifth – very good under the circumstances. In the second moto it looked like Thomas Covington had the podium but on the last lap the South African made the move to get himself on the box. If Vlaanderen started the season better he’d be right there with Olsen and Watson in the battle for third but he can still be pleased with fifth, it’s massive progress!

The Kemea Yamaha team drafted in Anthony Rodriguez after the injury to Vsevolod Brylyakov. It’s been quite challenge for Rodriguez to just jump in at Motocross after his last race was Ottobiano last year but he’s kept plugging away.

It was a great weekend for the Venezuelan as a 4-7 scorecard was good enough for sixth overall, big progress for A-Rod. Of course, the European GP’s will be much more stacked so the next challenge for him will be to secure the same kind of result at a European Grand Prix. There’s no doubt that Rodriguez is learning a lot during his time contesting the MX2 World Championship.

The recently signed SM-Action Yamaha rider, Michele Cervellin has been very consistent this year. Despite missing two rounds of the series earlier in the year he sits eighth in the championship which is very good.

Cervellin who’s known for his hard pack riding unsurprisingly looked quite good at the track in Semerang. After sitting fourth for the majority of the first moto he ended up sixth which was still a good result. The second moto didn’t go quite as well as he ended up eleventh but it was good enough for eighth overall. Progress and he’s getting more used to the Yamaha the more races he contests.

After finishing tenth in the MX2 World Championship last year this season hasn’t gone to plan for Brent van Doninck. The Belgian has a lot of talent, there’s no denying that but it’s been a shame to see him struggle so much with injury and his knee has still been troubling him this year.

However, Semarang might be step in the right direction for the DIGA-Procross Husqvarna rider. Ninth was his position this weekend as that’s where he ended up in both moto’s to secure a ninth overall. They’re his best moto’s of the year so far so he’ll want to build on that heading back to Europe. With a lot of injuries in the series it’s still possible for him to finish in the top fifteen in the world championship which has to be the goal for him now.