Who impressed: MX2 in Russia 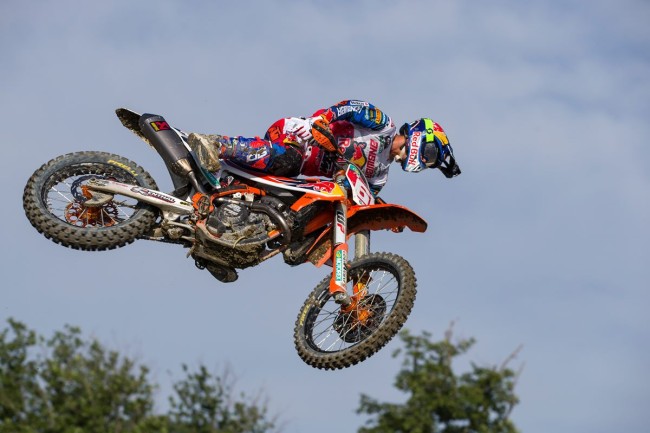 Jorge Prado: After taking nearly every holeshot all year, Jorge Prado got a bad start on one of the toughest places to pass and still found a way to win! The Spaniard’s intelligence won him the first race in Russia as he found a couple of great lines to gain time on a track that rewarded patience and smooth techniques.

Prado gained time on on his rivals on an uphill by squaring the previous sweeper to put himself on the grippier inside of the track as everyone else drifted wide battling the grip and trying to avoid the bank. Prado worked each pass out, working insides and outsides until he got the job done, eventually passing Olsen for the lead with a nice inside line with less than two laps to go to take his most impressive win of the season.

It was back to normal for race two with Prado nailing the holeshot and checking out but that first race showed the Spaniard can pass and win when he has too.

“It was a very hard weekend because in the first moto I had a good jump out of the gate but collided with a few other riders in the first corner and lost a lot of positions,” recalled the MX2 championship leader. “I had to work my way up to the front and it took all moto! With two laps to go I made the pass for first place: I was really happy afterwards, even if it did mean I had to use a lot of energy. I knew that the holeshot would be important and concentrated so much for the second moto. It made my life much easier. I’m happy to win again. Latvia is a track I like. My first year there I almost made a podium and last year I won the Qualifying race and the second moto. I’m looking forward to it and hope to make my gap in the championship a little bigger.”

Ben Watson: After a huge crash on Saturday Ben Watson dug deep despite painful wrists to comeback to 10-6 results and seventh overall. The Brit looked fast and loose on the bike with the crash not affecting his recent good form.

For Watson, despite the results on paper, this has to be a good boost for him mentally to be able to work through the field on a difficult track to pass and a terrain that isn’t his favourite. He seems to have found his flow and mental confidence again and with good starts should be up towards at the front again at Latvia if he continues to ride at his level.

“I have to be happy with 7th place. I had a really big crash on Saturday. I injured both wrists and didn’t even know if I could ride on Sunday. Luckily, I was able to ride, but trust me: it was not an easy day. I had a terrible gate pick and had to fight the pain. I had to come back from outside the top 20 in both races. I’m really happy with my second race. I moved up from 20th to 6th place, after a lot of passes. Now, I have one week to take a little rest an recover.”

Michele Cervellin: A disrespectful US media said they hadn’t heard of the Italian after Red Bud but those that are in the know realise Cervellin has been on the radar for a while now in MX2 and delivering good performances. Ever since his switch to Yamaha though he seems to be more consistent in terms of raw speed and again in Russia he was very good, with decent starts and strong races in the heat for fifth overall.

He tends to go under the radar a bit for some reason but Cervellin seems to be a tad more aggressive with his passes in 2019 perhaps realising his ability to be a podium contender on his day. 10th in the championship despite a few DNFs, Cervellin is doing a good job this season.

Maxime Renaux: The Frencham came though along with Prado a couple of years ago but injuries and getting a bit lost in EMX250 halted his progress slightly, but now he is beginning to show what he can really do.

Renaux is showing that sometimes it’s better for a rider to be in MX2 than EMX2 when has the talent to run the pace when he gets away with the best guys, in EMX250 thanks to bad starts he sometimes ended up in the pace of the guys he was capable of beating but MX2 allows him to show his full potential.

Renaux was unlucky in France with a first moto DNF robbing him of a top ten overall despite a ninth in the second motos, he backed that up with a seventh and ninth for ninth overall in Russia to make it three top ten motos in a row. Renaux could become a major player in the class soon, he has the talent to be up there and his confidence will be growing with every good result.