Who impressed: MX2 in Loket! 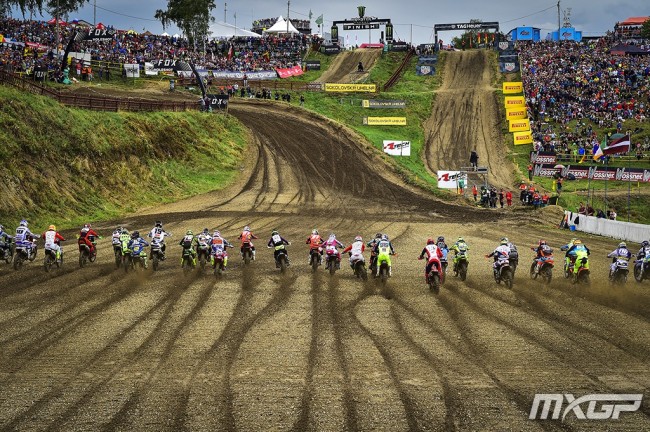 Pauls Jonass: The Latvian went two GP’s without the overall win but he put that right in Loket. Last year Jonass had a big crash there which ended his season but he didn’t let that get in the way this year. Loket isn’t exactly a Pauls Jonass track either as his hard pack riding has been his weakness in the past but he’s a new rider this year.

Jonass on top of the box! Pic: Youthstream

Jonass started fourth in the first moto and got his way into second, by the time he passed Prado the race leader was long gone.  Jonass didn’t waste as much time behind his team mate in the second moto as he found a way past on the fourth lap and from there on never looked back to take the Grand Prix victory. Having the red plate isn’t a problem for Jonass as he’s mentally strong this season and looks to be thriving under that championship pressure.

Thomas Covington: The American is turning into the complete rider. Covington took a few years to adjust to the hard pack tracks that the World Championship has to offer. However, he has clearly put in the hard work to improve on his weaknesses and it’s working a treat. Rasmus Jørgensen who is now working in the MX2 Factory Husqvarna awning helped take Thomas Kjer Olsen to a new level and it looks like he’s doing the same with Covington too.

In the first moto, Covington passed Prado on the second lap and simply checked out. He ended up winning by ten seconds, that’s one of his most impressive rides in his career. The second moto didn’t start well for Covington as he got caught up in a tangle. He came from the back of the pack and worked his way into tenth by the end of the moto which meant he salvaged a podium! That’s his third podium in a row but he will want to grab that winning feeling again soon.

Jorge Prado: The young Spanish sensation has been a bit up and down this year which perhaps is to be expected. However, this weekend was a step in the right direction. His starts were on point as usual but he ended up just missing the podium with a third and a sixth in the moto’s. It’s still a good result considering the hard pack track, similar to Jonass in the past, this is Prado’s weakness too.

These sort of results will help his confidence riding the hard pack tracks. Prado always puts up a fight and never makes it easy for his opponents, just ask Jeremy Seewer! The next GP is at Lommel and Prado could be the dark horse heading into round fourteen of the series.

Hunter Lawrence: Making a return to racing this weekend was the young Aussie and it was a solid return. Lawrence started tenth in the first moto and worked his way up to eighth by the end of the moto.  He made the second moto hard work for himself as he was fifteenth on lap one but just like in moto one he found his way into eighth.

Seventh overall on his return to racing is encouraging, he has a lot of potential and will want to unlock it during the later stage of the season. He could be a podium contender once again when he gets more bike time in after his recent back injury. The next GP could be tough for him as he missed the GP of Limburg last year through injury so Lommel on a race day is unknown territory for the Aussie.

Marshal Weltin: Making a surprise MX2 World Championship appearance this weekend was Marshal Weltin. Steve Dixon decided to draft in the American as a replacement for the injured Vsevolod Brylyakov. Unlike a few of the EMX250 riders making their World Championship debuts this weekend Weltin has took part at a GP before as he collected twelve points at Charlotte last year during his home GP.

This weekend went even better for Weltin as he scored twenty world championship points and finished ninth overall which is a very good result. Considering Weltin sits seventh in the EMX250 series it shows he really raised his game racing in the World Championship. It remains to be seen if Weltin will do anymore GP’s with DRT but he will be hoping he can!

Jed Beaton: Hunter Lawrence wasn’t the only Aussie to impress this weekend as Jed Beaton made his MX2 World Championship debut. HRC Honda decided to draft in the young Aussie for three GP’s and he has got things off to a good start.

The determined Aussie finished just behind his team mate in the first moto for fourteenth. However, the second moto was much better as he finished ninth. He would have learnt a lot racing in the MX2 World Championship and will look to bring that with him during the next two rounds he’ll contest with the team. He just missed out on a top ten overall this weekend as he finished in twelfth but he will want to break into that top ten.