Who impressed: MX2 in France 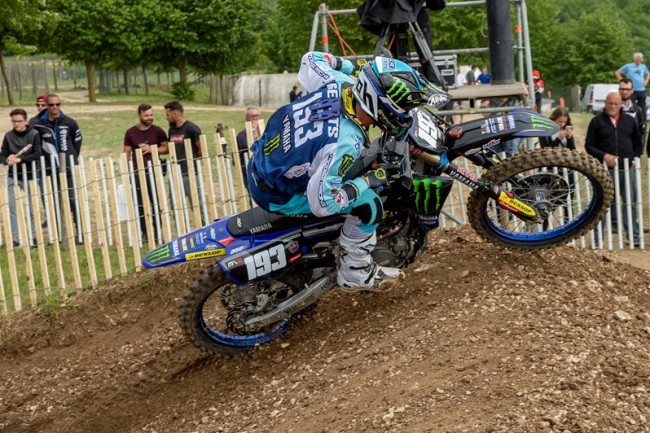 Jago Geerts: What a ride for the Belgian teenager! Geerts became the first rider to beat Jorge Prado this year and ran him down to do it.

Geerts had decent starts, around fifth in both motos, but that is still not ideal when Prado holeshots and pulls away! Geerts was undeterred, showing his determination and his skills on a track that isn’t his ideal conditions, he had some brilliant corner speed and great lines to reel in Prado in both motos, and if it wasn’t for that tip-over may have won the overall.

For me Geerts has similar natural talent and technical style to Prado but he is maybe a year behind in his development. The problem for him is he simply doesn’t get the starts he needs to prove it against the flawless Spaniard week-in, week-out, and often gets caught up in incidents battling in the top ten.

Geerts has shown he is now good on sand and hard-pack, he knows he can win now and this could be a big turning point in his career from a contender to a race winning threat every week.

The quiet, humble Belgian doesn’t like the limelight and even admitted his surprise and catching and passing Prado: “My first race win in MX2, what a great feeling. I’m the first one to beat Prado this year. I really didn’t expect it. That makes it extra special. I could close the gap on Jorge and put him under pressure. He started to make small mistakes. My first attack was the good one. The second race was almost a copy of the first one. I came back on him again, but made a small mistake. I immediately knew I could forget about the overall win. A bit of a disappointment. On the other hand: I’m second with exactly the same points as the world champion. Not bad at all.”

Ben Watson: It looked like it was going to be another tough day for Ben Watson after a crash on lap one of the first moto in France but from there he dug deep and turned his day around. Watson rode hard through the field to get 12th then finally, finally, got a good start and kept it on two wheels around lap one to show the speed he really has!

Watson kept Prado within five seconds for the first fifteen minutes, his teammate Geerts eventually got him for second and Watson couldn’t quite go with the Belgian when he dropped the hammer to chase Prado. Watson successfully fended off a charging Evans to take third and ensure a top three to end a tough run of results, in what was a great rebound ride.

“12th place in the first race isn’t a great result. I got washed out in the first lap, I couldn’t do anything about it. My footpeg was stuck in another wheel, so it took me a long time to get back. But my catch-up race was pretty good. I was quite happy with my riding. In race 2 I finally had a good start. That’s really important because the tracks are too easy, too fast, too flat. I could fight with the top guys again. Not easy, because I didn’t have that intensity for a while. I’m really happy with that third place, after some difficult weeks. Finally, I can go home with a good feeling,” commented Watson on his day.

Zach Pichon: So far this season results haven’t been great for Zach Pichon unless he has been riding a 450 in France suggesting his style might suit the bigger bike over the 250 machine,

But the home favourite finally got two good starts in MX2 and rode hard both motos for 12th overall (11-15). Son of a world champion father, it can’t be easy for Zach to live up to expectations but he showed he has potential in France and he will hope to keep getting stronger from here.

“Finally, some good points!” Said a relieved Pichon. “ I had an eleventh and a fifteenth in the motos, which put me in twelfth overall. I had two great starts from the outside, then it was good to battle inside the top ten. We keep working. Thanks to the team for their work and the French crowd!”