Who impressed: MX2 at Assen MXGP 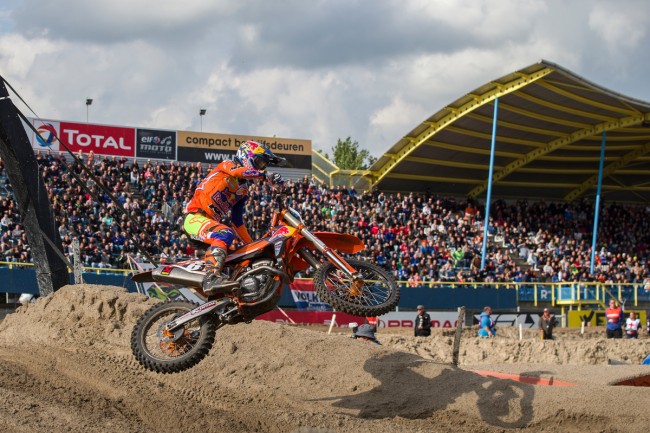 Jorge Prado – It is hard not to be impressed with this kid. Despite heat exhaustion a week before in the USA, Prado came back swinging in Assen and got the win with a 2-1 score. But it was the manner of his win that was impressive. He hounded his teammate Pauls Jonass in moto one, never letting him off the hook, then coped easily with the pressure of Jeremy Seewer catching him in race two and said he upped his pace on the final lap to keep Seewer at bay. “I just pushed a bit and make a small gap.” explained Prado very matter-of-factly in our interview. His poise and self-confidence for such a young kid is impressive and he is doing all of this while still at school. Prado is a special talent.

Jeremy Seewer – after a tough first moto, Seewer put in a great ride in race two to keep the championship battle going until the final round. Seewer almost took the win but just couldn’t find his way by Prado, making it the second week in a row Seewer was wishing he had another couple of laps to go in the race to get the win! Seewer will probably come up short in the championship this season, but he has veen very good this season, showing a lot of fight and aggression to come through the field nearly every week.

“Assen isn’t my favourite track, and probably isn’t the favourite track of any rider in the paddock but I’m really happy to end up on the podium after a tough first moto,” said Seewer. “My start wasn’t that great and I couldn’t make the passes, which wasn’t easy on this track and I struggled on the wave sections. We turned it around in race two and I came so close to winning, which is what I needed to do in order to stop Pauls Jonass winning the title at this race. I’m happy to keep the title alive though and push the championship until the final round. At least we will bring it to the last race where hopefully I can get another GP win and end the season on a high note.”

Conrad Mewse: After missing the USGP, Conrad Mewse was back in superb form at Assen. He looked like he was going to challenge for the win in race one once he got into third, but a crash while he was closing on Jonass and Prado scuppered that dream. in race two he passed Prado early for the lead an sprinted but the effort took it’s toll and Mewse eventually went back to 12th, but the speed was there and Mewse has really turned his season around in the second half of the season.

Mewse commented: “The speed was there this weekend and I had some great moments in both motos. In moto one I got off to a good start. Making some passes I found myself racing in third but a fall in the rhythm section dropped me back again. When I got back on my bike I tried to push again and crossed the line in sixth place. Getting the holeshot in moto two felt good. We had a good battle with Jorge Prado but I managed to make a small gap up front. I gave my all and managed to retain the lead for the first ten minutes of the race, but with the track being so demanding I started feeling tired and was unable to keep the same lap times. I had to settle for 12th in moto two. We still have one round to go and I really want to wrap up this season on a high.”

Calvin Vlaanderen: The HSF Logistics rider was really on form in Assen! He was in the mix in race one but lost the front end in a berm and went down – and still came back to fourth position. Vlaanderen then refused to let Jonass by in race two showing a lot of fight and took home another fourth place. Vlaanderen has shown a lot of raw speed but this weekend that speed also delivered some great results and will be a brilliant confidence booster for Vlaanderen going into next season.