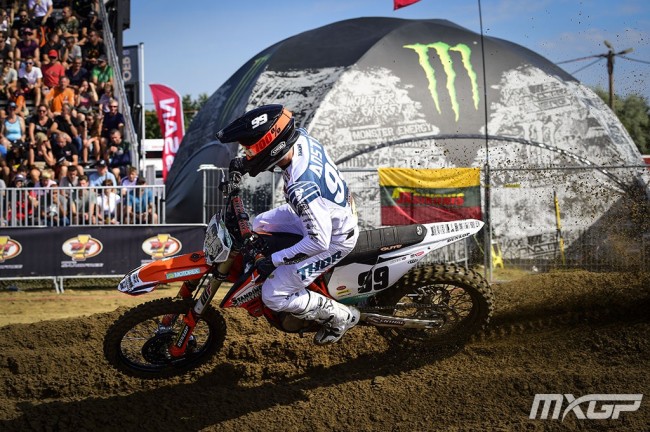 Max Anstie: The Brit was the fastest man at Lommel but that first moto crash ruined his chances at the overall win. In fact, those two motos in Sunday could well be a microcosm of Anstie’s 450 career so far, the talent to win but bad luck getting the way!

Anstie took some pain pails for his shoulder and then promptly went out and won race two, but had to pass Tim Gajser twice after crashing while 13 seconds out front! Anstie showed great heart to go along with his great technique in the second moto, it’s a reminder again of just how good he can be when he is feeling it and gives team GB some big hopes for Assen if he can ride like he did at Lommel!

Tim Gajser: Even Tim Gajser admittedly he didn’t expect to win Lommel! The world championship leader took one of the biggest victories of his career by going 2-2 to win his first ever GP at Lommel, quite an achievement for the hard pack specialist. Gajser however, did admit to spending a lot more time in the sand this winter and mentioned how he actually enjoyed the track this year!

“With the team, we have put a little bit more time in riding and testing in the sand,” said Tim. “In the past we didn’t have so much attention for the sand tracks. Also, myself, I didn’t train so much in the sand but this year I trained a lot in it and I think that’s the key.”

Gajser is turning into an even more well rounded rider as he gets ready to win his third world championship – and he isn’t even 23 years old yet!

Glenn Coldenhoff: This podium has been a long time coming for Glenn Coldenhoff! After just missing out several times last year despite some great rides, and then suffering a big bone crunching crash at Lommel over the winter, Glenn Coldenhoff finally got on the box to show he is back on form and starting to feel the flow that took him to two moto wins at Red Bud, it’s good timing too with the MXoN at Assen just around the corner!

Coldenhoff stayed with Febvre and Gajser for most of the first moto but just when it looked like he was ready to pounce, the Dutchman appeared to lose his rhythm at the end of the moto and settled for third. He took another third in race two with Anstie and Gajser both taking off at the front, but 3-3 meant a big reward for the efforts of Coldenhoff over the last couple of years and also to Standings Construct KTM, who after some up and down races got a moto win and a podium with their two riders. With the added bonus of Monticelli taking ninth overall it means three riders in the top ten for dedicated team.

“I started off slowly, but gradually found my rhythm,” said Coldenhoff of his strategy for the weekend. “Looking back, it was maybe not the best strategy, and I only qualified ninth. In discussions with the team on Saturday evening, we decided that I would come out swinging for the races.”