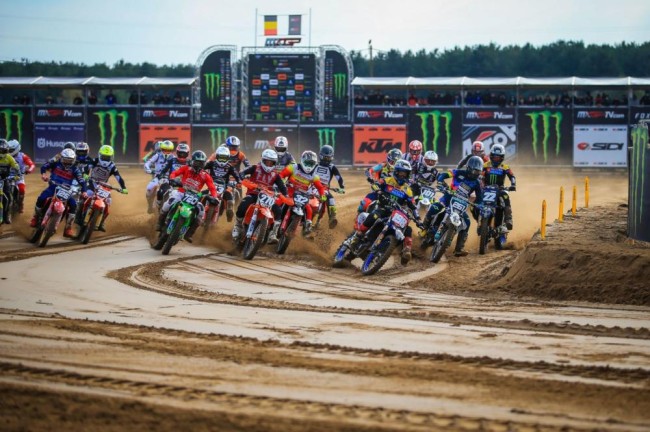 Lommel was a really tough and bumpy track but Guillem Farres made it look easy. Watching him today would have make you think he’s been studying Stefan Everts style recently and now he’s trying to perfect it! The young Spaniard was up on the pegs everywhere and looked great.

In the first moto, Farres got arm pump which saw him finish in fifth but in the second moto he really dominated and had a margin of over eight seconds – 5-1 was enough to give him the overall victory. With the way he rode he’ll be looking to do the same on Tuesday.

“I’m feeling that I’m being more and more consistent race by race and also more confident is strange that Spanish guys are together on the podium here in Lommel”, Farres stated. 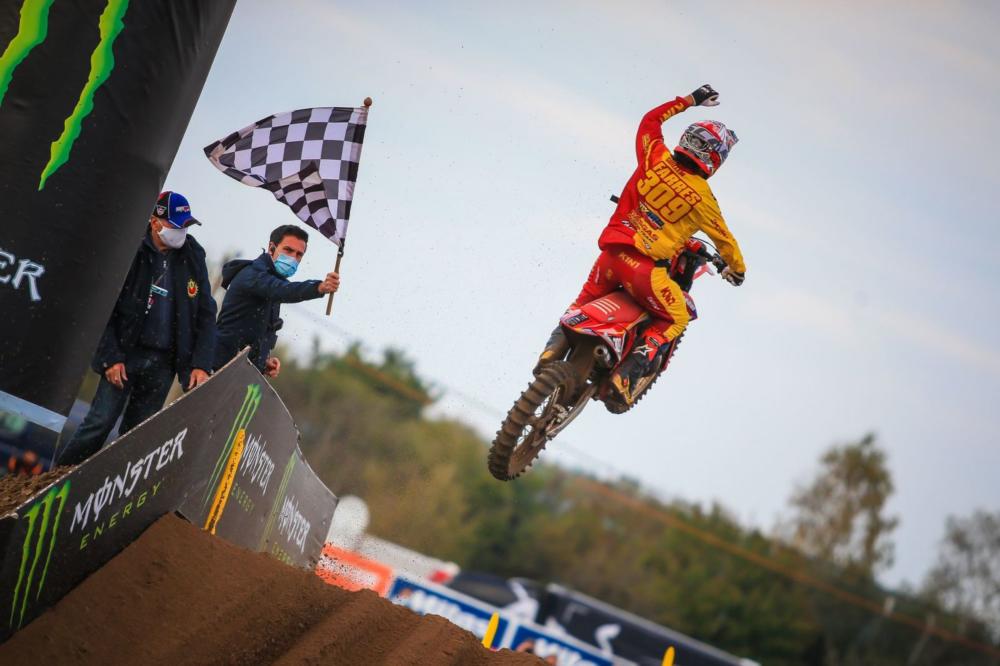 It was a great day for GasGas as they took both the moto wins and went 1-2 on the podium. Joining Farres on the podium was David Braceras who will remember today when he looks back on his career as a special. In the first moto the Spaniard rode great and won his first EMX125 moto.

The second moto didn’t go as well for Braceras as like Farres in moto one – he got the dreaded arm pump. 1-5 was good enough for the second step on the podium but he has the speed to win which he’ll look to do on Tuesday. If both Farres and Braceras can continue to improve and make progress Spain could have a great Motocross Des Nations team in the future!

“I’m really happy for me, for the boys and for the team because we worked really hard to be on the top and now is the time”, Braceras stated. 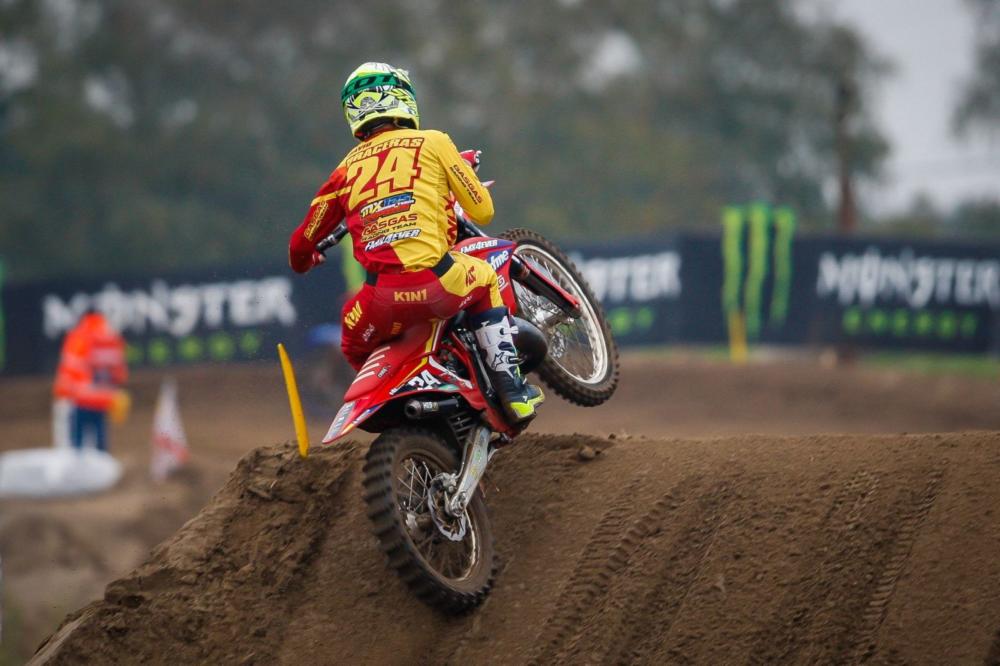 Young Swedish talent, Max Palsson is really starting to believe in himself more and more as the season progresses. The WZ KTM rider had a great day to get himself another podium but he probably had the pace to win a race – especially in the first moto.

Palsson had worked his way into second in the first moto and was quickly catching Braceras before a costly mistake dropped him down to fourth but he did get back up to second. The start wasn’t as good in race two but he came from eighth to third – again one of the fastest riders on the track so he can be happy with his speed.

There’s no doubting that Hakon Osterhagen has talent and he’s showed some great speed at times this year but staying on the bike has been the main issue. The Creymert KTM rider held the early lead in race one and as he was trying to pass Braceras he crashed which saw him drop down to ninth. He did battle his way back to sixth to show his speed.

In race two, he managed to stay on the bike and came home a brilliant second – the best EMX125 race of his career! 6-2 meant he just missed out on the podium but the speed is good. Osterhagen is expected to stay in the EMX125 class next year and if he can ride like that every week and stay on the bike he could be a title challenger.

It was only a few years ago that Florian Miot was tipped for a big future but things haven’t gone his way. However, at Lommel he reminded us of his talents. The French rider missed the last two rounds of the series injured and isn’t thought to be 100% fit but he still impressed at a very touch track.

Miot went 2-6 for fifth overall which is also a welcome result for the DIGA KTM team who have had a difficult year but it’s a step in the right direction.

Coming into the penultimate round of the series, Thibault Benistant was under a bit of pressure after 6 moto wins from Mattia Guadagnini but the French excelled himself and now looks odds on to clinch the title. In the past the deep sand would have been Benistant’s weak area but he now lives in the Netherlands and you can tell he’s put the hard work in.

The Hutten Metaal Yamaha rider dominated and went 1-1 to open up the championship lead to 24 points with one round remaining on Tuesday – it’s well and truly his title to lose now.

“I’m really happy to win both races, it was my goal for today. I don’t think of the championship or winning, I took it race by race and give my best every time. I’m really happy to be back on top of the box. I feel really good for the last round, I have the speed and feeling, and everything is here so we will do the same”, Benistant stated. 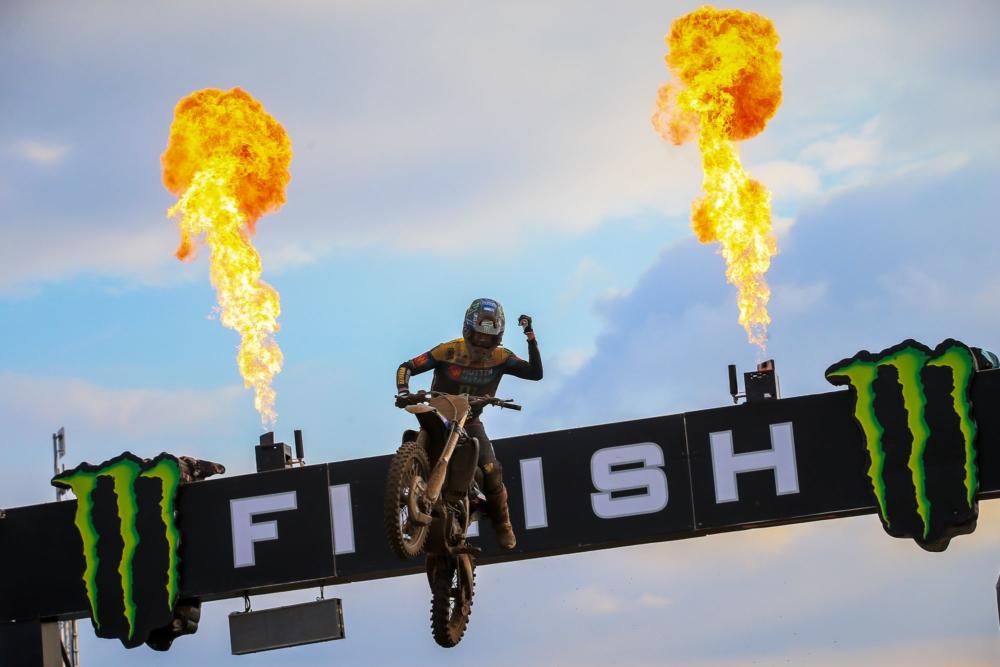 The track at Lommel today had Hakon Fredriksen’s name wrote all over it – the sort of track the Norwegian loves. In the first moto, Fredriksen ended up third but probably would have been a bit disappointed to be 20 seconds behind the leader.

It was all about that amazing ride in race two though! The SM-Action Yamaha rider was buried down in thirtieth after the opening lap. My word, he didn’t half come through the field, he ended up an amazing fourth – what a ride that was and it got him on the podium which he thoroughly deserved.

“The day started pretty good. I had a decent start in the first race, I was like top ten and then worked my way to third and finished there. Then in the second race I got a bad start and crashed on the first lap, so I was dead last and then worked my way up to fourth place and I’m happy with that, just going to charge for the next one and hope for a win”. reflected Fredriksen.

You can see just how much talent Kay de Wolf has on the bike, the Rockstar Husqvarna probably has the best style in the class and he only turned sixteen a couple of weeks ago. You could honestly watch de Wolf ride at that kind of track all day, the way he plays with the bumps is unreal to watch.

The EMX250 rookie had a few crashes which let him down but 5-3 meant he ended up fourth overall. On Tuesday he’ll be setting his sights on the podium!

Being Dutch, Marcel Conijn knows the Lommel track well and the KTM rider who just turned 21 on the lead up to the event will be happy with how it went.

Conijn was consistent and went 7-6 to secure sixth overall. The past couple of years Conijn has made big improvements and it goes to show that hard work does pay off. If he can work on his intensity he might be able to run right at the front but that’s something he lacks probably because he’s not used to the fast pace at the front and that’s only to be expected.

Young Swedish rider, Albin Gerhardsson tends to struggle with consistency but he was able to put two good moto’s together at Lommel. Swede’s tend to be good in the sand and Gerhardsson is no exception to that as he looked comfortable on the tough track.

Gerhardsson was brilliant in the first moto to come home in ninth – his first top ten result in the EMX250 championship. He was able to back that up with a solid twelfth in race two for ninth overall. A good result which should give him the confidence boost he possibly needs to be a consistent top ten rider.