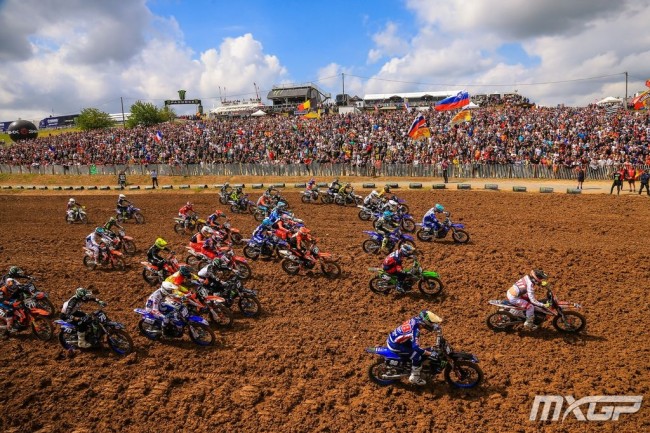 To think that Stephen Rubini took a big crash just a week ago and left Portugal in a cast. You really wouldn’t have thought it with the Frenchman’s riding in Saint Jean d’Angely. In the first moto, Rubini took the holeshot and led every lap of the race to bring home a win.

The second moto wasn’t so straight forward as he hit the starting gate and had to come from way back. He ended up coming back to sixth in what was a great comeback ride and it was enough to give him his first overall win of the season. It’s a weekend Rubini will remember when he looks back on his career because the support from the French crowd was crazy.

Coming into round three, Alberto Forato was unbeaten but he impressed at France for very different reasons. His starts have been good so far this year but we saw him struggle with them at Saint Jean d’Angely. In the first moto he came from outside the top ten to fourth before his seat fell off! Without that it might have even been better.

In the second moto he had an even worse start but you could tell he was pushing really hard and was making passes all over the place – so aggressive. He ended up in third and less than two seconds of the win! Another few laps and he might have done the business, he was certainly the fastest rider on the track.

Two years ago, French talent, Thibault Benistant was a rookie in the EMX125 class but we didn’t see the best of him in that class until last year when he won the title. Making the jump up to the EMX250 class isn’t easy but Benistant suits the 250cc really well.

The young French rider is very stylish on the 250cc and looked great. 3-4 was enough to make sure he finished third overall for his first EMX250 podium. It could have been even better if Forato didn’t pass him on the last lap because he’d have won the overall, talk about fine margins. The MJC Yamaha rider is already surprising people this year and should only continue to improve as he gels with the bike – the future is bright.

One rider that’s hard to figure out is Nicholas Lapucci. In the first race he didn’t get a good start as he was outside the top thirty but he worked his way up into eighteenth.

In the second moto he took the holeshot and he had absolutely no problem running the pace at the front. He led the race until two laps to go before being passed and finishing second. If Lapucci gets the start he can stay at the front but the area he needs to work on is if he gets a bad start – he has the speed to work through the pack! It will be interesting to see what that second moto will do for his confidence moving forward.

It’s not easy being an EMX250 rookie and the first two rounds haven’t been amazing for Rick Elzinga. Saint Jean d’Angely was a big step in the right direction for the young Dutch talent though and at a track that you wouldn’t say suits him so that’s very encouraging.

Elzinga picked up a 6-13 scorecard to end up ninth overall. He will have learnt a lot from the first moto especially because he has more of an idea the pace at the front now. If Elzinga can build on this he should come on leaps and bounds making him one to watch in 2020.

Young Swede talent, Isak Gifting has a lot of speed but the first two rounds of the series turned out to be a bit of a nightmare. Not only did he not score points but he just about qualified at the first round in Matterley Basin.

Gifting will be hoping his performance in France can help turn around his season as he ended up going 15-10 for tenth overall. He has the talent for plenty more top ten results so that’s what he’ll be hoping for as the season progresses.