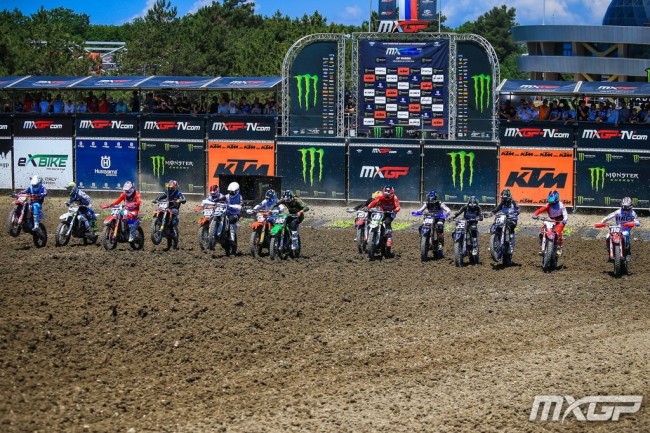 Coming into the season, Roan van De Moosdijk was hot favourite for the title but has had to wait until round four before winning an overall. Russia was almost the perfect weekend for the young Dutch talent.

After winning the first moto, he settled for second in moto two to clinch his first overall. With Forato having a bad weekend he’s now got the championship points gap down to twenty-one. He’ll be hoping to keep this form up and who knows, don’t rule him out – he might just win that title.

In the first moto, Stephen Rubini didn’t have the best of starts as he was just inside the top ten but at a track he has good memories from in MX2 last year it was no surprise to see him come through the pack. The Assomotor Honda rider climbed all the way up to third and showed he was one of the quickest riders on the track, if not the quickest.

Taking the holeshot, Rubini led every lap off the second moto and ended up comfortably winning. 2-1 was enough for second overall but more importantly he’s now got the red plate and has a two points gap over Forato – the championship battling is hotting up.

When it comes to talent, Rene Hofer might just be the most talented guy in the class. The Austrian recently picked up a knee injury but it only slowed him down for a few weeks.

Hofer went 2-3 in the moto’s to secure third overall and get on the box – his first EMX250 podium. With the talent he has he should get plenty more podium’s as the season progresses.

Italian rider, Giuseppe Tropepe has went under the radar in 2019 but he’s actually having a good season in the EMX250 series. The Yamaha rider hasn’t been getting the best of starts and because of that we haven’t saw him right at the front too much.

However, Tropepe ended up fourth overall in Russia and is fifth in the championship. A very good season so far but he’ll be hoping to improve his starts so he can be right at the front and challenge for podiums and race wins.

Young German talent, Jeremy Sydow picked up an injury at the first round of the series which means he’s missed a lot of racing but you honestly wouldn’t think it. On his return to the ADAC Youngsters Cup he actually won and he rode well in Russia too.

The DIGA-Procross Husqvarna rider went 5-8 in Russia for fifth overall which is very good considering how much racing he’s missed. Sydow will want on that podium before the end of the season and he has the speed.

Russia isn’t exactly a typical Dutch track but Rick Elzinga looked pretty comfortable riding the tough hard pack track. The SDM-Corse Yamaha rider is in his rookie year in the EMX250 class and tends to need a year in a class before excelling.

Having said that, Elzinga was impressive in Russia to go 8-6 in the moto’s for sixth overall. A very good weekend for the young Dutch rider and perhaps he even surprised himself but now he knows he can do it, that should help his confidence.