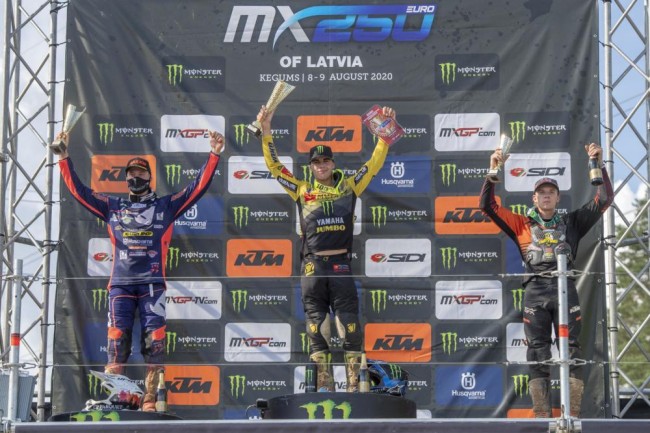 There was no doubt that young French talent, Thibault Benistant was one of the championship contenders coming into the season and after the first round would have more than likely been disappointing not to get on the box. Five months later, at round two of the series and he put a disappointing first round behind him as he stole the show around the sandy Kegums circuit. In the first race it looked like Benistant completely messed up his start as he didn’t get a good jump but he went up the inside of the first corner and came out of the second corner in the top five. The Hutten Metaal Yamaha rider quickly found his groove and made moves on Edberg and Guyon before pulling away at the front of the field – it looked like he was riding a different track compared to the other riders and took his first EMX250 race victory in style. 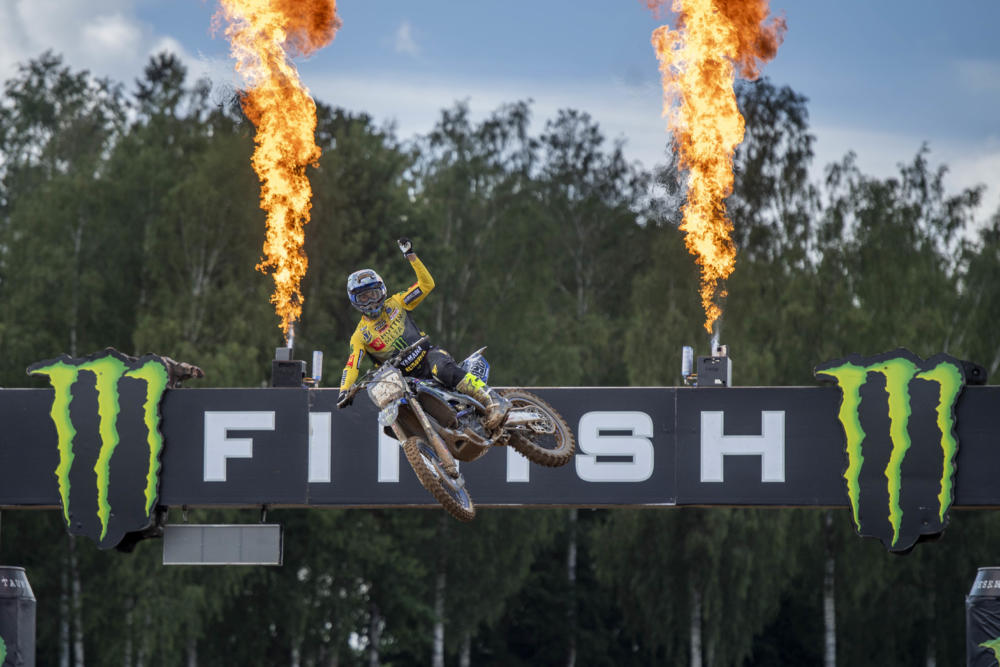 The second moto was a fantastic race! Benistant was in fifth after the first lap but by the half way point worked his way into second. EMX125 reigning champion, Guadagnini had a five seconds lead but Benistant was on the gas and with three laps to go was right on the Italian’s back wheel. On the last lap, Benistant actually made the pass but it was quickly followed by a mistake which saw him instantly lose the lead. In the end it was a 1-2 for Benistant but he secured his first EMX250 overall victory – a day he can remember forever. To make things even better he’s took the championship lead heading into round three of the series on Tuesday. With the way he’s riding factory MX2 teams are bound to be paying close attention, he could be the perfect Ben Watson replacement for Factory Yamaha!

For any EMX125 champion there’s always a lot of expectations on their shoulders when they move into the EMX250 championship and it would be fair to say that Mattia Guadagnini wouldn’t have been happy with his ninth overall at the opening round in Valkenswaard. He’ll be much happier about how round two went though! Things didn’t get off to the best of starts in the first race as he was buried down the pack in twelfth at the end of the opening lap. However, he stayed calm to work his way through the pack picking off riders ahead of him. By the end of the race the Maddii Husqvarna rider found himself in fifth which was a great recovery ride.

With a better start in the second moto, it was a completely different story for Guadagnini after passing Bogh Damm on the fifth lap he opened up a nice five seconds lead. When Benistant later caught up to his rear wheel, the Italian didn’t make it easy and rode a smart race to take the win and second overall. With the speed and talent Guadagnini has that should be the first EMX250 moto win of many and he’ll hope to stand on the top step of the box soon. 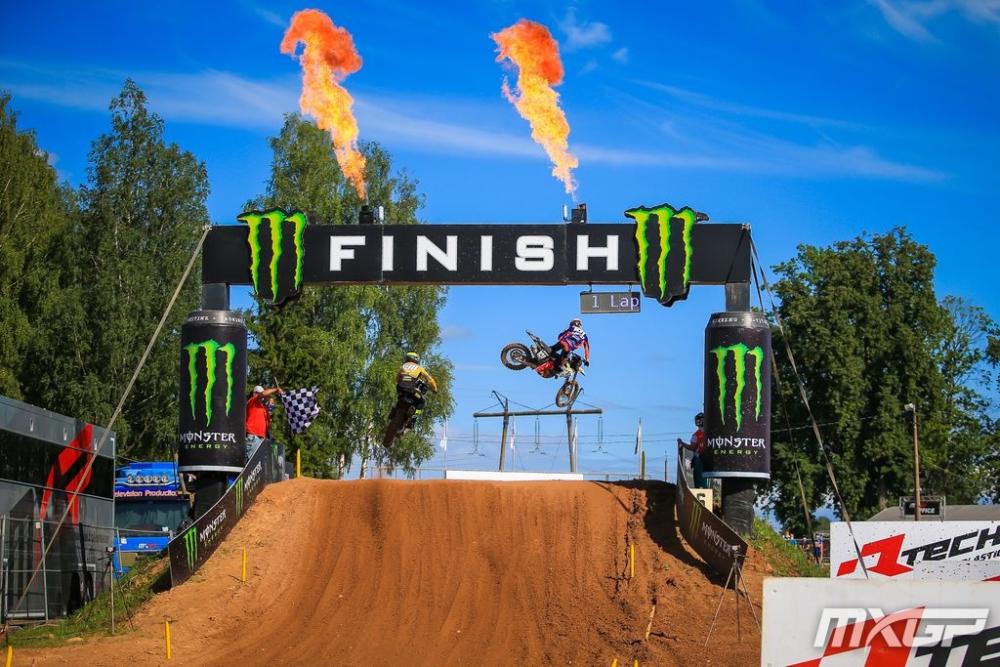 Nothing in it at the line in the second EMX250 race. Pic: Infront Moto Racing

They say consistency wins you titles and Isak Gifting has had a really strong start to the EMX250 championship campaign. The young Swedish rider came into the season a little under the radar but he’s well and truly in the hunt after the two opening rounds of the championship. 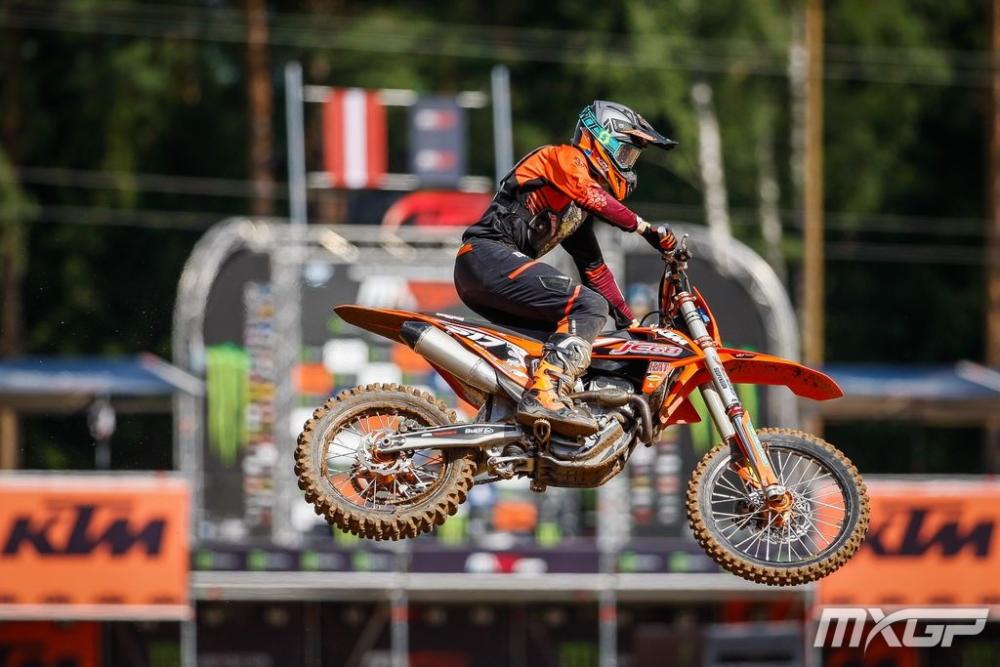 Gifting’s scorecard from the first two rounds is 2-9-2-4 which means he’s currently sitting second in the championship and only five points off Benistant. There’s no doubt he’s well and truly in the hunt and has put himself into a good position. It feels like Gifting is riding with a lot more maturity this year, in the past he’s pushed a lot which has led to crashes and injuries but this year he’s it’s a case of so far, so good as he’s been very consistent. There’s no doubting Gifting will want to grab a win and he has the speed in his locker so don’t be surprised to see it happening.

It’s hard not to be impressed with Estonian talent, Jorgen-Matthias Talviku who similarly to Gifting has been consistent but the crash he had at Valkenswaard has hurt him slightly. Coming into the second round of the series in Latvia, Talviku has been racing a lot of National championships like the Estonian and Latvian championships so he came into Kegums with plenty of preparation.

A 4-3 scorecard in the moto’s meant he just missed out on the podium but it’s still a good result and he can be happy with his progress. It certainly looks like he’s much more comfortable on the 250cc than he was on the 125cc so it’s promising for his future. Harri Kullas is his coach and he’ll be trying to help him make it to the top.

Perhaps one of the most surprising riders of the second round of the EMX250 championship was young Swede, Tim Edberg. There’s no doubt that Edberg has plenty of speed in his locker but he doesn’t always bring his A game to the races. He certainly looked comfy around the sandy Kegums circuit and he ended up a strong third in the first race – he’ll be happy with that! 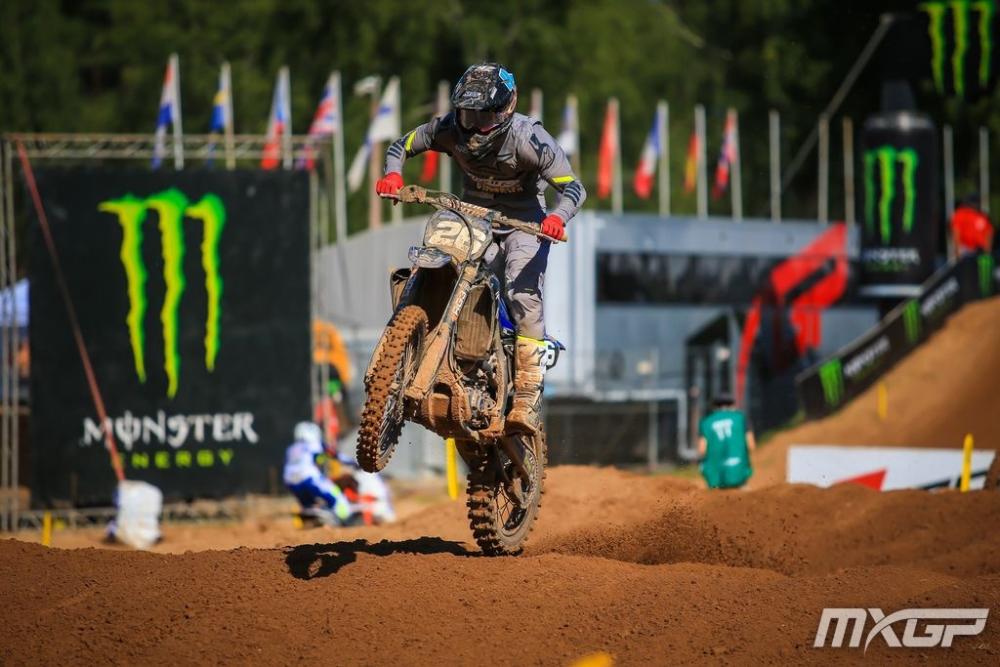 In the second moto he was buried down the pack but got back from fifteenth to eighth – a weakness of his in the past is coming through a pack but he dealt with it well at Kegums and will hope to bring this speed to the next rounds of the series. A fifth overall is a result he’ll hope to build on as the season progresses.