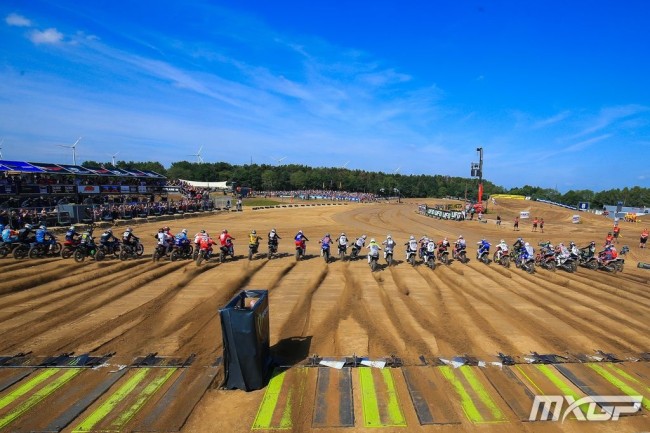 In the EMX250 class, it really was domination from Roan van de Moosdijk – he was so much quicker than the rest. In the first moto, the Dutch rider was fourth on the first lap but by lap five was leading. After passing Horgmo, the Dutch rider put in two or three really fast laps, looking at the lap times he was three seconds quicker than anyone else during those few laps – impressive speed to pull away at the front!

The second moto was more straight forward for van de Moosdijk as he took the holeshot and cleared off at the front. Coming into Lommel, he was third in the series but now he’s got the red plate heading into the final round with an eleven points lead – he’s going to be hard to stop to the title now. The last month he’s been riding incredibly well, whatever he’s been working on, it’s working wonders.

After making his MX2 debut and finishing ninth overall in Loket, Kevin Horgmo was back racing the EMX250 series in Lommel. The Norwegian got ill in Loket and hasn’t been able to prepare as he’d like for Lommel but it didn’t hinder him that much as he battled through his illness.

The CreyMert KTM rider finished third in both of the moto’s to secure second overall, that’s his second EMX250 podium! A great day for Horgmo considering he was feeling under the weather.

Starting off the season in the championship was Mikkel Haarup but he hates losing so for Lommel he dropped down to the EMX250 series again. The Ice One Husqvarna rider had a solid first race starting in third and finishing in second.

However, the second moto was really enjoyable watching him ride. The Danish talent went down at the start and had another crash on his way through the pack but that didn’t stop him. He battled his way through to an impressive eighth and it was enough for the final step on the podium. He really worked hard in that second moto and deserved to stand on the box. His speed at the end of the race when the other riders were exhausted was impressive.

Swedish talent, Ken Bengtson isn’t contesting the entire EMX250 series this year but secured a wild card entry for Lommel. It shouldn’t be a surprise to see Bengtson run at the front at the deep sand track of Lommel as it suits him down to the ground.

It was a consistent day for Bengtson as he went 6-5 in the moto’s for fifth overall. Despite not always racing in the GP paddock, the Swede hasn’t lost much of his speed – he’s still fast!

One rider that maybe hasn’t got the results this year to reflect his speed is Norwegian rider, Hakon Fredriksen. He’s a big guy for the 250cc so often struggles getting out of the gate but he excelled at the tough sand track of Lommel.

8-14 was enough to secure tenth overall for Fredriksen, his best round of the series so far but he has the speed to do that more regularly if he gets good starts in the future.

Before Lommel, Swedish rider, Albin Gerhardsson hadn’t scored a championship point but that all changed at the bumpy sand track. The Swedish rider gelled with the tough track really well and impressed on his KTM.

A  14-10 scorecard was enough for twelfth overall, a result which should do his confidence a world of good.

A shout out to John Adamson, who had a bike problem in the first moto but rode superbly well in moto two to come home in eleventh after a bad start. The Scot will be happy with how he rode in the second moto as he came all the way from twentieth – that’s not easy to do in a fast, stacked EMX250 class.