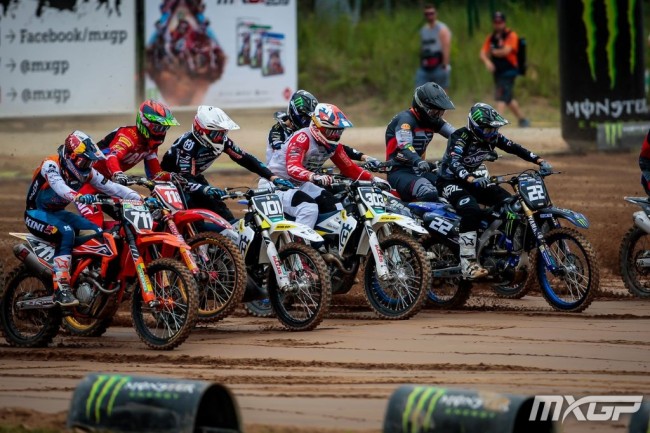 In Latvia, the young Dutch rider had his starts dialled and simply dominated proceedings. The points gap was 21 points before the weekend but he’s now got it down to just 7. We head back to hard pack this weekend in Germany so it will be very interesting to see if Van De Moosdijk can keep his win streak going.

It’s hard not to be impressed with Italian rider, Alberto Forato this season as he’s been flying on the Maddii Husqvarna.  At the start of the season his starts were actually pretty good despite his heavy build but his starts in Latvia were far from good.

In the first moto on the first lap he was outside the top twenty but the Italian passes riders left, right and centre! He certainly doesn’t seem to sit behind anyone for too long. He came back to third in what was a fantastic ride. Even though the first start was bad the second race was even worse as he was down in the deck on turn one which left him dead last. Just like the first moto he had no problems passing riders, he came from last to fourth, it shows how fast he’s riding at the moment. He managed to get the red plate back but currently is level on points with Rubini in the championship – it literally doesn’t get any closer than that!

Honestly, it’s hard not to be impressed with Jeremy Sydow. Believe it or not the kid picked up an injury during the first round of the series and has only been back on the bike for 3-4 weeks but you wouldn’t think it with his riding.

The DIGA-Procross Husqvarna rider had good starts all weekend which makes things easier, but he went 2-5 in the moto’s for third overall and his first EMX250 podium – a nice memory to look back on some day. In the second moto he took a crash otherwise he had another second in the bag but it was still a great weekend. Sydow now heads to his home GP this weekend and will want a similar kind of result.

After a good second moto in Russia, the signs were good for Raivo Dankers and he was able to kick on at the weekend. The Latvian track is one you’d say the Dutch rider suits and he showed some good pace around Kegums.

The Hutten Metaal Yamaha rider had a good weekend going 4-7 in the moto’s. The Dutch rider has all the talent in the world and after a tough start to the season it’s nice for him to remind us of that talent. He should go into the rest of the season with plenty of confidence now.

He might be concentrating on the EMX125 series but Mattia Guadagnini had a wildcard EMX250 round in Latvia and not for the first time showed he has good pace on the 250cc two stroke.

The Italian rider had a shocking start in the first moto as he was outside the top twenty-five but he worked his way into fourteenth in a good recovery ride. With a good start in the second moto he was able to confirm his pace as he crossed the line in a great second position. Even though he’s racing in the EMX125 class and sometimes it’s uncertain how riders will make the transition to the 250cc, Guadagnini is looking like he’ll have no such problems when he makes the move in 2020.

After signing with the WZ KTM team pretty late, Bastian Boegh Damm decided not to contest the first four rounds of the series but made his return to the GP paddock at the weekend. The Dane talent had a strong showing considering it was his first EMX250 round of the season.

Boegh Damm ended up 6-9 in the moto’s to secure eighth overall, very solid! The Dane rider should only continue to improve as he gets used to the intensity of racing again.

Guadagnini wasn’t the only EMX125 rider to contest the EMX250 class in Latvia as Jorgen-Matthias Talviku was also in action. The Estonian rider got good starts on his A1M Husqvarna so got to see the speed at the front of the EMX250 class first hand.

Talviku was comfortably running in the top ten in both moto’s but faded towards the end of both moto’s which is completely understandable, it was his first EMX250 race after all. In the end he ended up 11-15 in the moto’s for 12th overall, there’s no doubt he’d have learnt a lot in Latvia.