Who impressed: EMX250 in Switzerland! 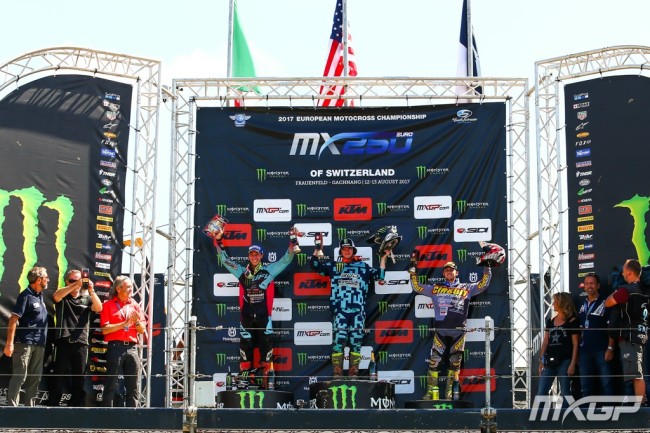 Tristan Charboneau:  After going 1-1 at the last round of the series in Portugal, Charboneau brought his ‘A’ game to the Swiss GP as well. He simply dominated the first moto of the weekend and came home over five seconds ahead of the second placed rider after easing off towards the end of the moto.

Charboneau couldn’t stamp the same authority in the second moto as he came home in third but it was still good enough for the overall. After a tough start to the season he’s now eighth in the championship, he’s the fastest rider in the class at the moment.

Morgan Lesiardo: After a tough GP in Lommel, Lesiardo was back competing in the EMX250 series this weekend wanting to put the bad weekend behind him. That’s exactly what the Italian done too, after a bad start in the first moto outside the top ten he didn’t panic and worked his way up to finish a solid fourth.

The second moto was a much different story though as he started in second, he passed Charboneau at the half way point in the moto to grab the moto win and second overall. After a disastrous weekend for Furlotti, Lesairdo has the red plate back and has a twenty six point’s advantage with one round to go, he’s odds on favourite for the title now!

Mathys Boisrame: It was a solid weekend for the Assomotor Honda rider who’s one of the riders to really step it up this year after a rookie year behind him. Unfortunately for the Italian he picked up an injury before round one which forced him to miss three rounds of the season.

If Boisrame was fit for the start of the season then he would definitely be challenging for the title. Boisrame ended up third overall in Switzerland, he’s showing good speed which could land him an MX2 ride next year.

Marshal Weltin: The American just missed out of the podium by one point but it was a good weekend for the BUD Kawasaki rider as he ended up fourth overall. He has competed the last two rounds of the MX2 World Championship for DRT Kawasaki and that has clearly helped him bring on his speed. It’s a shame he missed the podium but it was an encouraging weekend nonetheless.

Jed Beaton: Just like Weltin, Jed Beaton has contested the last two rounds of the MX2 World Championship but for the Factory HRC Honda outfit. Beaton didn’t have the best first moto’s in Switzerland as he could only get back to twelfth after a bad start.

The second moto was a different story as he started in the top three. He passed Charboneau and challenged Lesiardo but couldn’t make a move on the Italian so had to settle for an impressive second. The Aussie ended up fifth overall but has the speed for the podium if he can get two good starts, he will be hoping it all clicks together during the last round in France.

Adrien Malaval:  The DIGA-Procross rider was sat down in twenty-first spot in the championship after Lommel but has showed flashes of what he can do during the course of the season.

The Swiss track clearly suited his style as he had his best round of the year. Malaval finished seventh in the first moto and was even more impressive in moto two as he brought home a fifth position. A sixth overall is much better from the French rider and with the last round of the series being his home GP he will be hoping for much of the same there.

Todd Kellett: Since the last round of the EMX250 series, Kellett has switched teams to the Hitachi KTM UK outfit. He had a consistent weekend finishing up in ninth overall.  He has been pretty consistent this year as he sits thirteenth in the championship despite not travelling to the Russian round. However, he will be hoping to break into the top five again during the last round of the series.