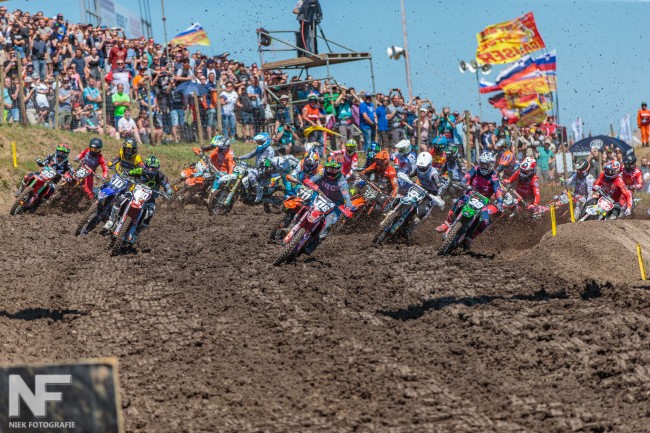 The Teutschenthal track in Germany had Stephen Rubini’s name all over it but sometimes that can be a bad thing as it brings extra pressure to win on the surfaces that suit you the most. The Assomotor Honda rider really didn’t disappoint though and with Lommel up next it was a must win for Rubini.

The French talent had the perfect day going 1-1 to take the overall. Now he has the red plate back and a ten points lead in the championship. If he can get a podium at Lommel he’s in with a real shout of clinching the title.

The last two rounds couldn’t have went much better for Dutch talent Roan Van De Moosdijk. Was he able to bring his good form to a challenging and technical track of Teutschenthal? Of course.

We shouldn’t be that surprised to see Van De Moosdijk excel on that sort of track because even though he’s Dutch, he’s a very technical rider. After making a mistake in the first moto he had to content with second. The second moto Van De Moosdijk and Rubini had a great battle with the Dutch rider all over the Frenchie but he just couldn’t do enough to win but he was really fast! With Lommel up next Van De Moosdijk will probably go into that round as favourite to grab the win there.

It was a home GP for Jeremy Sydow and he’d have loved to get on the box. Even though it wasn’t meant to be, he had good weekend in front of his home fans and give them plenty to cheer.

The DIGA-Procross Husqvarna went 4-4, he just didn’t have the pace for the front three who were all running top ten MX2 speed but it was still a very positive weekend for Sydow.

Making the move up from the 125cc, the start of the season was difficult for Raivo Dankers, especially after picking up a pre-season injury.  However, his season has took a turn for the better since Russia and he continues to improve.

Teutschenthal isn’t a track you’d have thought Dankers would have excelled at but 11-6 in the moto’s was enough to secure an impressive sixth overall and move him into ninth in the championship. All things considered, it’s turning out to be a productive season for the young Dutch talent as he improves his hard pack riding.

There’s no doubt that young Swede, Isak Gifting has a lot of talent but the start of this season really didn’t go to plan for him. The KTM rider didn’t score a single point at the first two rounds of the series.

Gifting has clearly continued to put the hard work in though and is starting to show much better speed to turn his season around and end it on a positive note. He had his best weekend yet in Germany going 10-9 in the moto’s for eleventh overall. He’ll want to get closer to the top five as the season progresses.

At the start of the season, Yann Crnjanski decided to not contest any rounds of the EMX250 series as he wanted to focus on school. Since his exams are now over he’s started to do EMX250 but it’s not easy coming into the series after missing a few rounds.

Teutschenthal went pretty good for the French rider as he ended up 14-18 for sixteenth overall. He’ll hope to close the gap to the top ten as he gets more races under his belt.