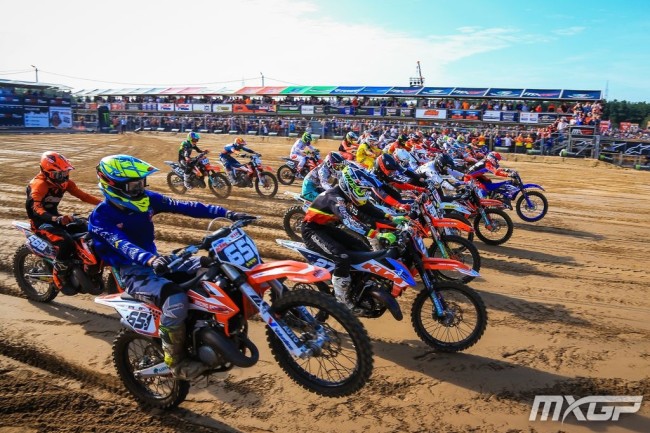 It was a special weekend for young German talent and a career first. WZ KTM rider, Simon Laengenfelder won his first EMX125 overall and at the toughest track on the calendar, impressive stuff!

In the first race, Laengenfelder got close to Guadagnini a few times but in the end had to be content with second. The second moto, Laengenfelder came out with a lot more fight and determination. On the third lap he passed Guadagnini and never looked back. The German’s fastest lap was four seconds quicker than anyone else in the second moto. It’s fair to say he can ride the sand.

Despite being French, Tom Guyon is pretty good in the deep sand – some French riders really struggle at tracks like Lommel. It’s probably the weekend where Guyon has lost the title but honestly, third overall is a good result.

A bad start in the first moto cost the french rider as he needed to make his way from seventh to third – by that time the front two were gone. With twenty points in the championship chase with one round left it’s going to be tough for Guyon to win the title but he’s still had a very good season on his VRT KTM and has a promising future.

Not all Italian’s get on well with the sand but Andrea Bonacorsi is one exception. Last year, the Italian ended up going third overall at Lommel. He proved this year it was no fluke but bad starts cost him a podium.

The Celestini KTM rider came from outside the top ten in moto one to come all the way back to fourth, certainly nothing wrong with his speed and fitness. The second moto was a similar story as he was just outside the top ten again, this time he worked his way into fifth by the end. The Italian just missed out on a podium as he ended up fourth overall but should be happy with his riding at the toughest track on the calendar.

Sometimes a home GP can be difficult for young riders to deal with but no such problems for Liam Everts. The Belgian actually had his best round of the series so far as he loved comfortable around the bumpy Lommel track.

Everts has a lovely technique and looked like he was having fun jumping over the big bumps. He ended up fifth overall on the day which is a very good result. When he gets stronger he’s going to be a very interesting rider to keep an eye on – he’s got bags of talent.

After winning the EMX85 title last year, there’s no doubt that Camden Mc Lellan has a lot of talent but he’s needed time to gel with the 125cc – that can often happen rookies.

However, Lommel was a step in the right direction for Mc Lellan as he ended up sixth overall which is easily his best round of the year and he’d never even raced at Lommel so that’s very encouraging for the South African rider.

Another rider with the best race of their season was young Swede, Max Palsson who looked comfortable in the deep sand. He ended up eighth overall and will be particularly pleased with his first moto as he finished seventh just behind Everts in what was an impressive ride.