Who impressed: EMX125 in Switzerland! 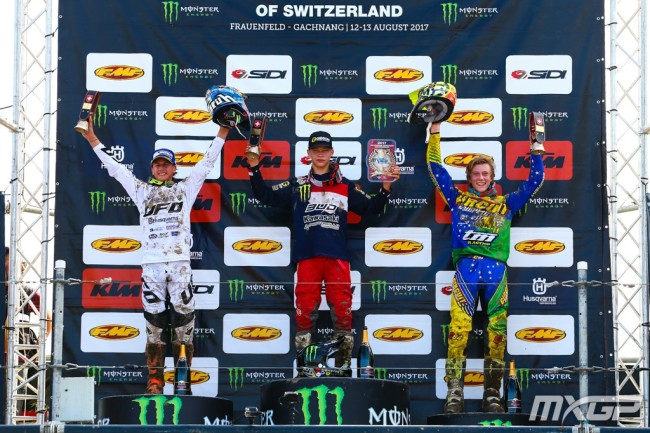 Brian Moreau: After picking up forty vital championship points during the brutal sand of Lommel we were back in hard pack conditions this weekend, music to the French riders ears!

In the first moto he just came up short but ended up a strong second less than three seconds behind the race winner. Moreau had the last laugh though as he won the second moto and clinched the overall. With Haarup having a disastrous weekend the talented BUD Kawasaki rider has now opened up a nineteen points lead with only one round to go. It’s looking like Moreau will clinch the title in Sweden if he can avoid any hiccups.

Gianluca Facchetti:  It’s been a good few weeks for the Italian after winning the Junior World Championship in Estonia and getting himself on the podium in the deep sand of Lommel – not his favoured conditions.

It was another great weekend for the Maddii Husqvarna rider as he won the first moto but came up short in the second moto. However, second overall is a good result and it moves him up to second in the standings. After a tough start to the season Facchetti can be happy with his progress throughout the course of the season.

Mattia Guadagnini: What a special weekend it was for the Italian TM rider. Before Switzerland, Guadagnini sat down in eighteenth in the championship standings with fifty-one points to his name. I don’t think anyone had him down to get a podium this weekend but that’s exactly what he did.

A superb fourth in moto one backed up with a solid sixth was good enough to give him his first overall podium in the EMX125 class. This will help him believe he belongs at the front now, can he carry this form into Sweden? It remains to be seen.

Rene Hofer: After a tough weekend in Lommel, Rene Hofer was back in form at Switzerland. The best placed rookie in the series finished fifth in both the moto’s for fifth overall. That was clearly his position this weekend.

The Austrian has had podium speed pretty much all season long, will he be able to get on the box during the last round of the series? It’s certainly possible if he can get his KTM out of the gate.

Maxime Charlier: After Lommel, the French rider sat down in twenty-fifth in the series but you feel he is capable of much more! In his home country, he is very fast and can run a high pace. However, he hasn’t quite adapted to the EMX series but Switzerland was a step in the right direction.

He was especially impressive in the first moto as he came home in eighth, he backed that up with a thirteenth in moto two as he ended up seventh overall. That’s a pretty good result for the privateer but he is more than capable of those kind of results on a more consistent basis.

The Italian ended up a strong eighth overall which is a solid result considering the first moto didn’t go to plan as he ended outside the points. In the second moto he led for the first two laps before coming home in an impressive third, that should help his confidence moving forward.

Jeremy Sydow: It was another very good weekend for the WZ KTM rider, he just missed out on the podium by one point as he ended up fourth overall. The German is definitely starting to step it up though and can be happy with the progress he has made since round one.

He will want on the podium on the last round of the season. Sweden will be his last race in the EMX125 class as he will move up to the EMX250 class in 2018 so there would be no better way to end his 125 racing days than getting on the box.