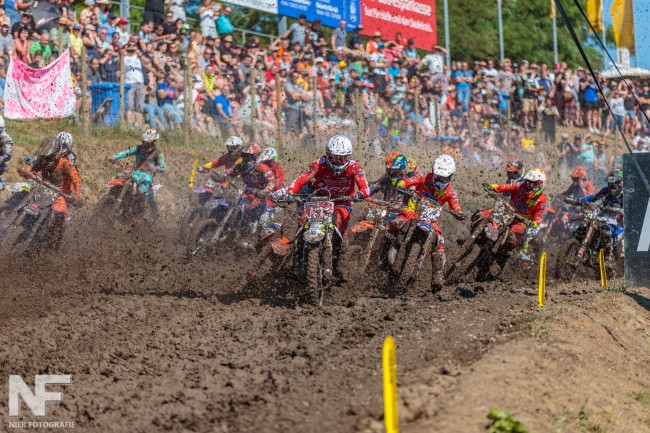 It was almost the perfect weekend for young French talent, Tom Guyon and perhaps it should have been. During the first moto he was all over Guadagnini but ran into the back of him which left him down in sixth. He managed to recover to get back to second but he was the fastest rider on the track.

With Guadagnini having a terrible second moto, Guyon had a massive opportunity to really close the championship gap. Guyon was sitting in third for most the race but made his move with a few laps to go and started to pressure for the lead. On the last lap he made the move stick and ended up with the moto win. The championship gap is now down to 13 points so it’s wide open between Guadagnini and Guyon with one sand and one hard pack track left on the EMX125 calendar.

Racing in front of your home fans can sometimes be daunting but Simon Laengenfelder didn’t have such problems as he raised his game to please the German fans.

In the first moto, Laengenfelder crossed the line in fourth which was a good ride. The second moto is a what could have been moment as he was leading but got passed on the last lap. Second was still strong though and he ended up second overall. The positive thing is that he knows he has what it takes to win now – he was so close!

It’s really hard not to be impressed with young Swiss talent, Mike Gwerder. The KTM rider is very consistent  and ended up going 3-3 for another podium.

It’s Gwerder’s second podium in a row and his confidence right now should be at an all time high. His consistency has also moved him up to third in the championship. The Swiss rider doesn’t get much hype but he’s having an impressive season so far.

Much was expected of French talent, Florian Miot coming into the season but things just haven’t been going his way since making the switch to the MJC Yamaha team.

Germany could be a turning point for the young French rider as he rode more like we expect from him. He finished fifth in the first moto which is his first top five of the season! Moto two didn’t go as smoothly but eighth was still solid and he ended up seventh overall. He’ll be hoping to kick on from this performance and end the season on a high note.

Coming into the season it was difficult to predict how Liam Everts would perform because he’s so small and hasn’t got the strength that’s really required yet but that hasn’t stopped him from producing good results – talent must just run in the family!

Everts suited the technical track in Germany and finished 10-5 in the moto’s for an impressive eighth overall. Everts continue to improve as the season progresses which is the most important thing for him. He could be one to really watch in 2020.

Two rookies haven’t had it easy after making the move up from the 85cc last year. But things went in a step the right direction in Germany for both Camden Mc Lellan and Kay Karssemakers.

Mc Lellan on the Kosak KTM ended up fourteenth overall which is a big improvement after failing to score points in a lot of races this year. The South African is happy with the progress he’s making, “I am really happy with the progress I have made over the past few weeks and looking forward to proving myself in the rounds to come”.

As for Karssemakers, he’s showed some great pace in the Netherlands on the 125cc but the EMX125 series has been a different story but Teutschenthal could be the turning point. 20-10 in the moto’s meant he ended up fifteenth overall and will be hoping the second moto is a sign of things to come!