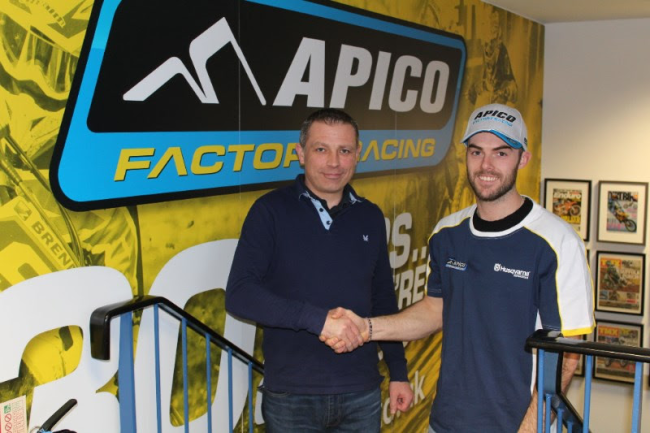 Following the recent departure of Kristian Whatley from the MVR-D Team who he’d initially signed for the 2017 season, the opportunity presented itself to have Kristian join the Apico Husqvarna MX1 team alongside current riders Matt Burrows and Jamie Law.

Kristian Whatley: “I’m really happy to have the opportunity to ride for the Apico Husqvarna Team set up, with everything now in place to make sure I can concentrate on winning the British Maxxis and MX Nationals MX1 titles. I’d like to thank Sean Burrows, Dylan Brown at Apico and David Edwards from Husqvarna for the opportunity to compete in the premier British MX series for 2017 and can’t wait to get behind the gate”.

Sean Burrows – Apico Husqvarna Team Manager: “Having Kristian join the team is very exciting for us. After having a rough season in 2016 we strongly believe that he can get back to the form that saw him claim all three titles in 2013”

Dylan Brown – Owner of Apico Factory Racing: “Recent circumstances resulted in Kristian Whatley leaving MVR-D for reasons unconfirmed by either party. It was only last week that Kristian approached Sean Burrows (Apico Husqvarna Team Manager) about the possibility of a ride for our team. After some in-depth negotiation between Husqvarna, Sean, Kristian and I, we have managed to secure the services of Kristian Whatley for the 2017 outdoor season with Apico Husqvarna. Kristian is a welcome addition to the team with Matt Burrows, Jamie Law riding the FC450 and youth rider Jack Lindsay will be aboard the TC85 BW. The guys are preparing now for the outdoor season and are all raring to take it to the line for 2017”.