What next for Kawasaki? 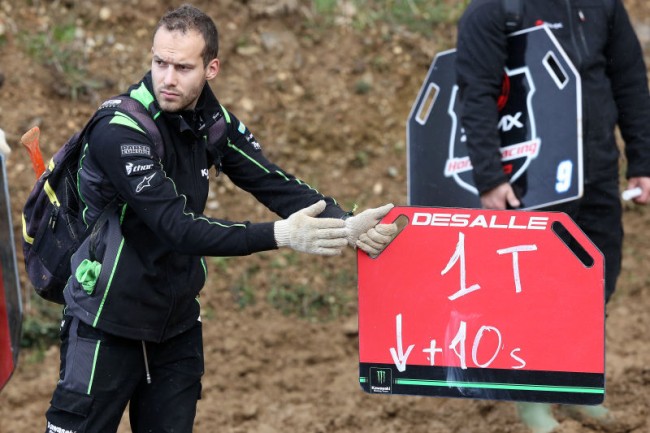 It has not been a good few years for the Kawasaki Racing Team in MXGP. Last year promised so much with the signing of Ryan Villopoto, only for him to get injured at the fourth round and never come back. That left the team with Tyla Rattray as the soul rider for the rest of the season.

KRT signed Clement Desalle and Jordi Tixier for the approaching up and coming season. However, it was announced last week that Jordi will miss the first two GP’s. Clement Desalle was looking good pre-season but disaster struck at Valence crashing trying to pass Shaun Simpson leaving him with a broken arm.

The first round of MXGP is fast approaching at Qatar and, with the world watching, you would imagine they will have a rider on the line for the first round. Although some riders will have contracts, when factory Kawasaki gives you a chance to race the world championship, it’s hard to say no. So, who could they draft in?

Xavier Boog – Last year when the team suspected RV was not coming back they decided to draft Xavier Boog in. It didn’t last long though as he rode the British GP for them and got hurt and didn’t ride for them again. Xavier is riding the French Championship for BUD Kawasaki in 2016. It wouldn’t be too complicated to draft Xavier in for Qatar, however, he has been riding some Arenacross and Supercross so he might not be the best prepared for the MXGP World Championship.

Valentin Teillet – Just like Boog, Teillet was drafted in by KRT as a replacement a few years ago. Valentin could be a decent option to draft in for Qatar with short notice. He has been racing motocross so possibly a bit more prepared that Boog. However, Valentin is more of a 250 rider and the 450 doesn’t suit his style as much.

Tommy Searle – Tommy could be the perfect rider for KRT to draft in for Qatar. Tommy has already been preparing for the season on a Dixon Kawasaki. His speed was good at Hawkstone but bike problems let him down with three DNF’s that day. The KRT machine would be more reliable and once Clement/Jordi come back then Tommy could go back and ride for Dixon Kawasaki again.

Tanel Leok – Tanel Leok has contested the Italian Championship and has been flying! Tanel has been running with the top MXGP riders this pre season. The problem is that Tanel is a sand rider and his results during his last MXGP campaign where not all that great. It would be a risk for KRT to draft him in but something worth thinking about.

Petar Petrov – This option more depends on the speed of Hunter Lawrence. Petar is a big guy and should suit a 450 well and him moving to MXGP would allow Kawasaki to put Hunter in the MX2 class to partner Dylan Ferrandis. The problem is that Petar has been preparing for the season ahead on a 250cc machine so won’t be the best prepared on the bigger bike heading into Qatar.

Dean Ferris and Todd Waters – These guys rode in MXGP class during the 2015 season. Both are now back in Australia contesting the National championship. Todd had a good year in 2015 finishing ninth in championship on-board his ICE ONE Husqvarna. Todd only had good things to say about MXGP and would probably jump at the chance to come back. Dean and Todd would both be good options and could be both worth making a phone call too.

It will be interesting to see what KRT decide to do – they may decide not to act and just not contest Qatar or they could have a surprise in store!

Hopefully Clement Desalle makes a full recovery as soon as possible and we see him back on the Kawasaki soon!