What next for Jeremy Seewer? 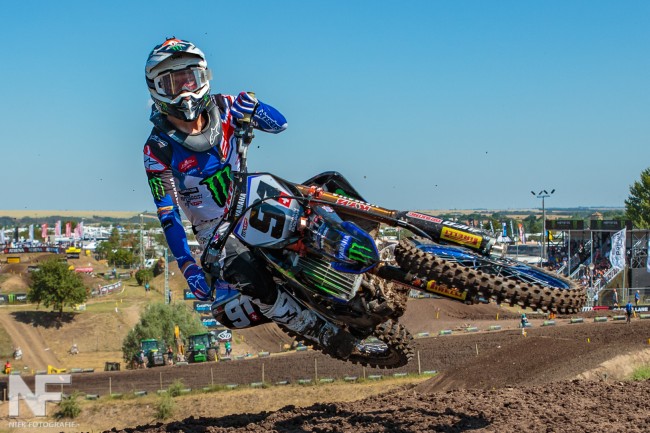 Jeremy Seewer, now second in the FIM MXGP Motocross World Championship, is apparently a top target for Team HRC for 2020 but could also fill a third factory Yamaha saddle back in Monster Energy Wilvo colours.

The Swiss is one of the most high profile riders on the market for next season. Seewer, a former MX2 world championship runner-up, climbed above the absent Tony Cairoli in the standings after the Grand Prix of Asia last weekend in just his second year in the premier class. The soon-to-be 25 year old climbed the podium for the first time at the Grand Prix of Russia and then collected two more trophies at the recent Indonesian ‘double’.

“The championship changes a lot with guys out injured and it is never nice to see it and nobody wants it,” Seewer said of his ascension through the MXGP points table. “I’m second now but I don’t put it at the front of my mind too much. It’s hard to forget about it but I just try to perform at my best and we’ll see where I end up.”

The ex-Suzuki man is renowned for his easy manner and consistency (he has yet to miss a Grand Prix through injury after starting his full time world championship career in 2014) and has spent 2019 building up speed and the lessons learned about racing a 450 from his debut in 2018. These attributes will be appealing to HRC who have persevered with Brian Bogers alongside series leader Tim Gajser for two years but the luckless Dutchman – who missed almost all of 2018 with a broken foot – has only made four top ten moto finishes to-date on the CRF450R in 2019.

If Seewer does not turn red then the paddock rumour mill has Monster Energy Wilvo Yamaha (who are ready to assume factory status for Yamaha) as potentially running a third rider alongside Arnaud Tonus and Gautier Paulin. For Seewer it would mean a return to the relatively new crew headed by Louis Vosters, who claimed their first GP victory in their maiden MXGP season in 2017 and who have collected more podium trophies than any other team apart from HRC/Gajser in 2019.