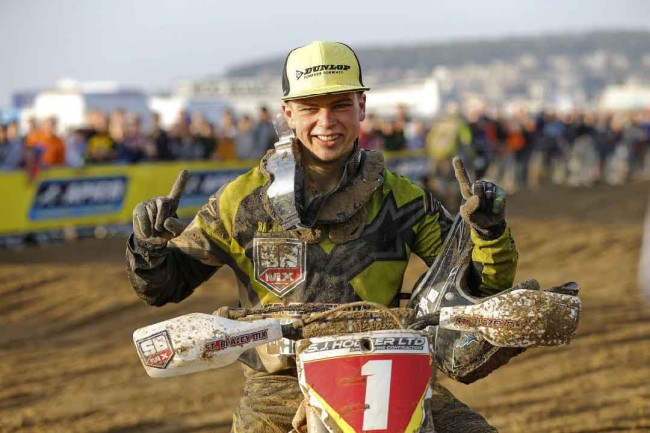 The HydroGarden Weston Beach Race 2017, which attracted over 70,000 people to Weston-Super-Mare over the course of the weekend for the 35th running of the event, saw an outstanding weekend of racing that concluded with local-lad Todd Kellett earning a second consecutive win (October 15) following a flawless race in the adult solo category. Enduro legend David Knight took an impressive second place result with Martin Barr taking to the podium in third. Jens Walvoort and Jak Taylor won the morning’s 85cc Big Wheel and Small Wheel classes.

With a plethora of high-profile riders lining up to compete at this year’s event, which is a true battle of man and machine where anything really can happen, it was certainly difficult to predict the outcome of the highlight adult solo race. Kellett, who finished on the podium in the RPG Racing 4×4 quad class with his brother Ty, fired out of the gate to enjoy an incredible start aboard his St Blazey MX/SJ Hodder Husqvarna. Close behind down the 1.5-mile straight, Red Bull KTM Factory Racing’s Jonny Walker was second with Ashley Greedy third. Knight was fourth with Luke Hawkins fifth and British MX1 Champion Graeme Irwin sixth.

By the halfway point Kellett had enjoyed a perfect pit stop, while Barr managed to edge into second and Knighter took up third. Greedy went on to eventually drop back to sixth, while Irwin suffered issues and was forced to retire from the proceedings.

Kellett’s consistency and speed throughout the gruelling three-hour race was relentless and the 20-year-old Somerset rider was untouchable in the closing stages, as he brought his machine home to take a well-earned victory. 39-year-old Manxman David Knight, who was the last person to win back-to-back events here in 2010/2011, took the runner-up spot after pushing his bike over the line and was the only other rider to finish on the same number of laps as Kellett. Buildbase Honda rider Martin Barr from Northern Ireland equalled his debut result from last year with a podium third in what was a spectacular battle of the amateurs against the pros at a near capacity entry of over 800 riders. Ross Parkinson was presented the HydroGarden Weston Beach Race young gun award in memory of Dan Horton-Tilley as the highest placed 19-year-old with his 81st position.

Jonny Walker concluded the event two-places higher than last year after making a number of unscheduled pit stops early on in the race. He finished fourth while Jamie Wainwright climbed back from 10th in the early part of the race to fifth place. Guy Martin, who is known for his record breaking two-wheeled exploits, made a valiant effort to race a Honda Africa Twin around the course, although this proved troublesome for the Lincolnshire-lad and he was forced to retire after battling with the notorious Weston-Super-Mare dunes. The Over 40’s class was won by Dutch rider Ton Van Grinsven with Robert Clark second and Andy Frost in third.

Flat out down the beach! Pic: RHL Activities

Todd Kellett – 2017 HydroGarden Weston Beach Race Adult Solo Race Winner
“It’s been a great day, and everyone knows me and my brother love it here, so to take another win is really special. It was nice to get a holeshot; it doesn’t really mean anything, but it gives you a good feeling and I did the same last year. I wanted to try and break Jonny (Walker) and get a gap between us, so I set a fast pace in the beginning and planned to calm it down a bit an hour in. It didn’t really happen, as I could run that pace for nearly the whole race, which was great. I got a little bit tired later on, but I managed to push through it, and then on the very last lap I had a very slow lap to ensure the clock went to zero so I didn’t have to do an additional lap. It was absolutely perfect and I’m over the moon; I didn’t have any crashes, which is always nice. I was expecting the traffic, but I felt my technical skill was good enough and I was thankful to be able to negotiate all the riders. I can’t wait to go for a hat-trick of wins next year.”

David Knight – 2017 HydroGarden Weston Beach Race second position
“I was steady away off the start, and I played it safe in the beginning, although I was a little bit further back than I’d have liked. I crashed in the second lap after landing on another rider and I hurt my wrist, which knocked me a little bit. I had a few other moments in the race, and I dropped back to sixth at one point. I got into a rhythm, calmed down, and as the fuel went down the bike was lighter and easier to ride. I got up to second and was pulling away, but Todd was flying, so I just ignored how far he was ahead to concentrate on what was going on behind me. I was catching him a little bit, but not close enough to make an impact. Anything can happen and it isn’t over until the chequered flag – I had to push the bike back over the line. I’ve had a right good laugh this weekend with a load of mates, Guy (Martin) has been here and I’ve had a laugh with him and it’s just been how it should be. I would love to get another win around here, Todd was flying today but it can so easily go wrong and I hope to come back to challenge for the victory again in future. I’m made up to be on the podium, and to get second feels as good as a win after what I’ve had over the last year and a half.”

Martin Barr – 2017 HydroGarden Weston Beach Race third position
“I got a decent start and was running third in the first lap. I was behind Jonny (Walker) and I got a face full of sand, then on one of the big dunes I looped the bike out and went down. I went back to around 10th, but I just started picking off the riders and came back through. After the first pit stop I was around second or third, but I think I had about seven crashes between there and the end of the race. I got stuck with two bikes in my back wheel, so I had to stop and pull them out, but the Honda 450 RX worked a dream out there. The first time I sat my arse on it was down the start straight. I’ve not been able to train much since a crash I had a few weeks ago, so to come away with another third position with so little preparation was really satisfying.”

Ton Van Grinsven – 2017 HydroGarden Weston Beach Race Adult Solo Over 40’s Winner
“This was my first time here. I’ve ridden other beach races, but I work for the GL12 team and they asked me to do it. It was very nice to do it, the track was very wet, but I enjoyed being here. It’s always nice to win and I would like to come back, but with a bit more practice. I haven’t really ridden in the last year so it was very difficult.”

Jonathan Aldridge – HydroGarden Managing Director
“It’s been really good. I think for the second time round we could learn all the lessons from last year; it’s not too complicated yet and we’ve come along and tried to do a better job than last year. We’ve really enjoyed it. I think people have begun to appreciate HydroGarden – in the beginning it was a case of who are they, what does it mean, but they’ve come back and talked to us again the second time, which is great for us. The stand we had this year was fantastic, and to be fair to RHL Activities they’ve done a cracking job here. The whole standard of the event has gone up, we’ve managed to match that with what we’ve done, and it’s just made the whole event brilliant, it just seems to have been so much better this year than last.”

Gareth Hockey – Director of RHL Activities
“I’m absolutely blown away; this year’s HydroGarden Weston Beach Race is one of the best events we’ve ever done – I can’t wait to come back and do it again. Thanks has to go to everyone involved, all of our top riders and of course Guy Martin. The game has certainly changed; HydroGarden has certainly helped raise the standard of the event and what we’re looking to achieve. It’s also great that we’ve had the support from the industry, as this is where we want to be and something we can build further from. We’ve got lots of ideas to make it bigger and better for next year, and it’s also great so many top riders are interested in competing here. I’d like to add that the standard of the junior races was exceptional; developing young talent is our passion and important for the future of our sport.”