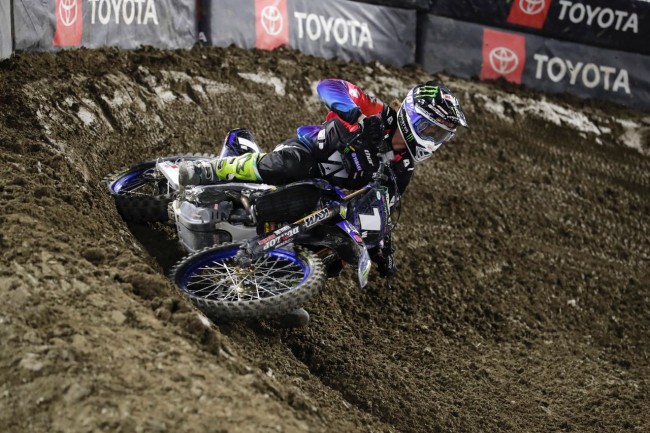 It seems virtually all of the top supercross riders excluding Sexton, McElrath and Nichols will be lining up tonight in what is a much anticipated West Coast resumption!

It’s been four months since the West raced so it will be almost like a brand new season and with injured riders like Christian Craig and the sensational Jett Lawrence returning plus the addition of Hunter Lawrence who will make his long-awaited supercross debut added to the championship title trio of Ferrandis, Cooper and Forkner, it promises to produce some exhilarating racing.

Ferrandis leads by seven points over teammate Justin Cooper with Austin Forkner a further six back but with just three rounds left, Cooper and Forkner are under pressure to deliver race wins immediately to give themselves the edge in the championship headed into the shootout. But with the return of Jett Lawrence, who almost won the last race he entered, plus a very talented Christian Craig and guys like McAdoo, Hartranft, Mossiman and Drake, it means any bad starts will make it much harder to come through the field than in the East coast series.

Ferrandis’ starts aren’t always the greatest and can be a chink in his armour but will the altitude and being on that Star racing Yamaha eradicate that issue and play to his advantage along with Cooper?

The Lawrence brothers will one of the most intriguing to watch. Hunter was the rider Geico Honda signed based on his GP speed and they happened to get Jett as part of package but America was seemingly unaware of just how good this kid was. Winning an EMX2 moto at 14 is an incredible achievement, so they rest of us knew he was something special and now it’s Jett who Hunter admits is the faster indoors.

But how will Hunter adjust to that in the race? Can he keep his emotions in check if Jett passes him and can he come through unscathed? Hunter has a lot of talent, I have no doubt he can be a top supercross rider to go alongside his elite outdoor skills if he can get through these learning races unscathed and ride within himself in order to gain experience for next year. But both brothers are very competitive and very confident, so expect to see one or both create some fireworks at some stage this week!