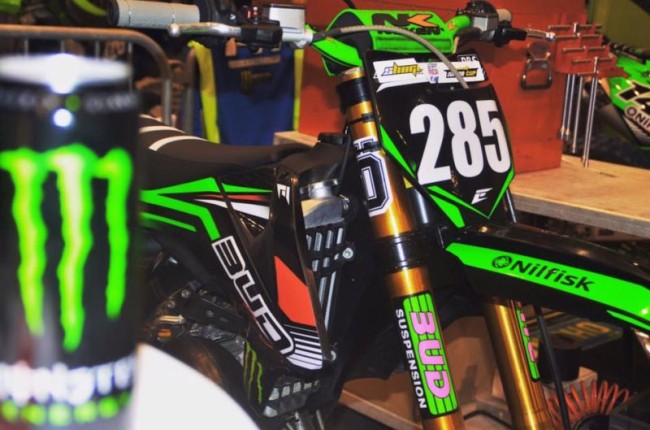 As we reported earlier today here, Ryan Surratt is no longer part of the Bud Kawasaki team for 2017 and will be replaced by little known American Marshal Weltin. Tristan Charboneau who had top ten performances in the US nationals last year before injury remains with the team.

You can read the official PR here:

We are now at only few weeks of the opening round of the AMA SX championship in Anaheim and Bud racing is happy to announce his final line up for the 2017 season.

The main goal of the team will be to shine and put the new KX250F on the top spots of the European EMX250 championship and French Elite Motocross series. The 125cc European Motocross championship will also be an important challenge for the youngest rider of the team, Brian Moreau, 14 years old who was runner up in the World Junior 85cc championship in 2015.

The AMA Supercross west coast 250 series will also be part of our program to give the opportunity to the young American rider Tristan Charboneau to race his first ever Pro SX in Anaheim on January 7th.

He will be joined in Europe and France by American Marshal Weltin from Michigan, Marshal had a good amateur season in 2015 and will have the opportunity to show his real potential in Europe.

Kim Savaste from Finland had a good end of EMX125 season with two overall second place finishes in Belgium & Switzerland but had a crash during MXDN in Maggiora and injured his back, Kim will be back riding late in the season.

To finish, the last rider will be Maxime Desprey to race only the French Elite 450 for the Team but he will race all MXGP 450 in Europe thanks to an agreement with Dutch Team Gebbens who will take care of Maxime in MXGP class, the Team Bud racing will already be full during the MXGP events with all the young racing the EMX125 & 250 class.

Ryan SURRATT who had to be part of the team originally will not race for the Team in 2017, the Team and Ryan have preferred to parts ways to take different direction for both parties.

Thank you all for your support and hope to see you in Anaheim 1 next month!