Weekend watch: Three mains in one night at A2! 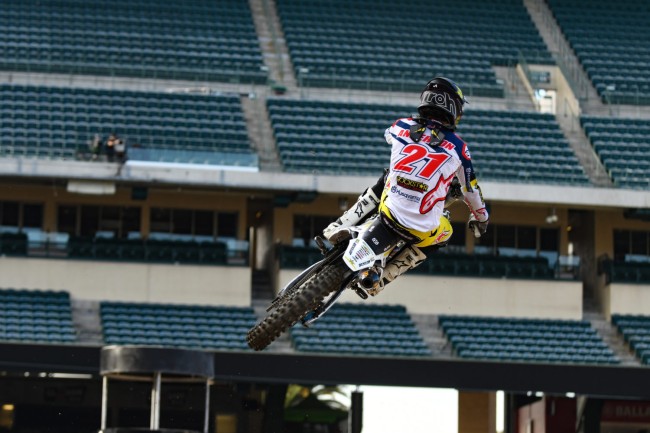 There will be something new for supercross this weekend at Anaheim two with three main events in one night instead of the usual heat race and main.

The idea is to give the paying fan better value for money and keep the TV fan tuned in all night to watch the stars of the sport do battle – and it should be more exicting!

With three starts and each race increasing in length, it might not just be the normal contenders up front, a rider with good sprint speed like Malcolm Stewart could really battle it out and get a good race result.

The overall points will be calculated based on all three main events combined, which might get a little complicated but it’s nice to see Feld try something different.

If it works, it might just be the way forward for the sport.

But what do the riders have to say?

Jason Anderson admitted it could all get a bit intense out there! “For me it will be the same (practice) I think the triple crown will be crazy.” admitted the points leader. “The starts and first laps are crazy enough so to have three is going to be insane. It’s going to be a lot of action for the fans but for the riders it’s going to be a little but more stressful, you have the shorter moto at the beginning where people can send it. It’s going to be entertaining.”

Ken Roczen wasn’t so pumped with the idea, believing one longer moto shows who works hard and who doesn’t: “Having three motos like that is not long enough almost. We train and do 20 plus one out here and that really separates the riders. Having a stacked field and three races, so for sure everybody is going to send it.”

So it certainly isn’t a unanimously positive verdict from last weekend’s podium men, but as they all admit it should be better for the fans – but who will come out on top?!