Weeekend watch: All to play for in MXGP and America! 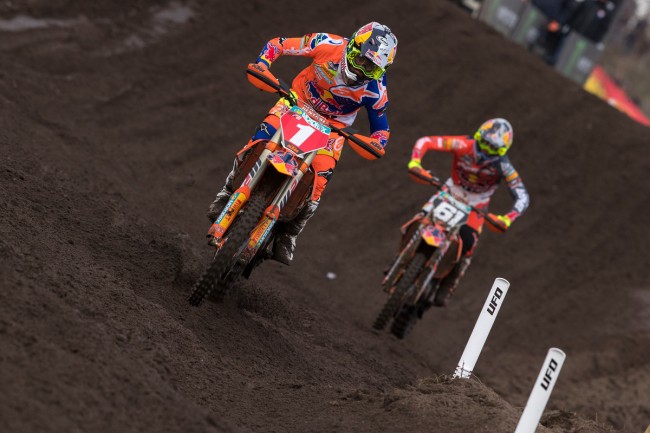 It’s full steam ahead this weekend for the world championship and the US Nationals as both sides series resume after a weekend off.

The world championship heads to Loket, a slick, stoned surface that should favour the hard pack specialists – even if Jeffrey Herlings pears unbeatable on any surface this year!

Tony Cairoli has been getting treatment on his thumb injury this week so hopefully he will be back on form and with the the track suiting the likes of Desalle, Gajser, Febvre and Paulin, Cairoli will need to be at his best to stay on the podium and not have the rest get between him and rival Herlings.

In MX2 it’s even-stevens between Pauls Jonass and Jorge a Prado with the Spaniard cool as a cucumber this season in defeat or victory. Jonass though looked back to his best form at the previous round in Indonesia with dominant first moto win until a first turn slip-off allowed Prado to gain some points on him.

But Jonass had a big crash at Loket a couple of years ago so it will be a big mental test this week to have the title pressure and the memory of that crash on that huge downhill that caused concussion and is something he still had to be careful with last season.

In the states the 450 title was blown wide open with a DNF sand crash happy ninth place from Eli Tomac at a Red Bud allowing overall winner Marvin Musquin to take the points lead but by just three points.

In addition it looks like Ken Roczen is rejuvenated again after bike changes and a moto win at Red Bud so he could well be in the mix at Millville.

In the 250 class Aaron Plessinger took charge of the class with a 1-1 to underline his role as title favourite but Austin Forkner might well be seeking some revenge the pass by Plessinger that left him in the ground in the first moto at Red Bud, and if Dylan’s Ferrandis can get out of the start is surely going to be a threat for the win as will second place in the points and Plessinger’s biggest title rival, Alex Martin who will be looking to win on what is literally his home track – his family own the circuit!

It is set to be a another great weekend of top class motocross racing!