Webb on trying to get into Tomac’s head! 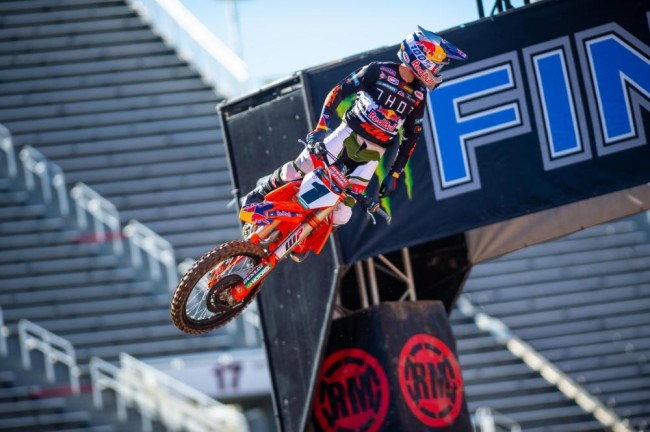 Cooper Webb has admitted he has been trying to play some mind games with championship leader, Eli Tomac – but says that it hasn’t worked! Webb has allegedly been talking to his rivals on the line trying to get in their heads before the gate drops but Webb admits Tomac is a tough nut to crack!

“I was trying,” admitted Webb when asked about it in the press conference, “but he has been very mentally strong and he has been frickin’ rippin’, so I think it’s a little easier with some of the other guys but not so much with him! At this point I just try to do what I can on the bike, keep getting great starts which I think have helped. I have gotten first and second twice now so that’s as good as I can ask for, three more and we will see what will happen but I’ve been happy just knowing I gave it my all this last seven. So far I think it’s good to be able to run with Eli, at the beginning of the season I think he definitely had a bit of and upper hand.

“I feel like my speed has been good this whole time, fitness. The main event, getting that good start really helped, Kenny was really fast in the beginning, he was like that in the heat. I just kept plugging away doing my laps and he kind of fell off (the pace) a little bit to where I could just ride my own race. It was a great race to win, it was awesome to get my second win in Salt Lake.”

On whether he expected Roczen to last the whole main went with his health issues, Webb commented: “I felt like our pace was really good, we were just riding really good, there wasn’t a ton of passing spots, I wasn’t sure, after the heat he was super fiery so I felt maybe he would figure it out or whatever but obviously he made some mistakes or whatnot.”