Webb on a wonderful win at SLC6 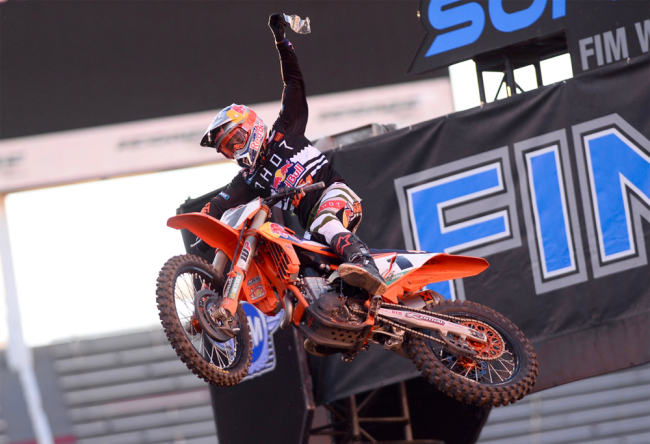 With a modified schedule rounding out the final seven rounds of the 2020 AMA Supercross Championship, the reigning 450SX Champion has made a habit out of winning on Wednesdays, as he swept all three of the mid-week races, while earning respectable runner-up finishes on the Sunday bouts to keep himself in the running for a second-straight title.

After qualifying fifth overall earlier in the day, Webb powered his KTM 450 SX-F FACTORY EDITION into a top-three start in 450SX Heat 2 and he quickly jumped into the second-place position. He battled hard to ultimately secure second-place in the heat race.

In the Main Event, Webb had a great jump off the start as he battled through the first-turn with the front of the pack, settling into third early on. Five laps in, Webb overtook second and from there he set his sights on catching the leader, Zach Osborne. Webb soon found himself in a close race once again with championship points rival Ken Roczen and the duo continued to battle until series points leader Eli Tomac joined the fight. Webb and Tomac broke away from the rest of the field and with seven laps to go Webb made the pass to take over the lead. He held off a hard-charging Tomac for the remainder of the 29-lap race to ultimately secure his fourth Main Event victory of the season.

Cooper Webb: “We were all really close in speed, not a lot separating. I fixed the whoops about halfway – I think that’s what was holding me back – and I started hitting them really well. It was a tight race between us four and the whole race it seemed like a lot of pressure between us all because we weren’t making many mistakes. I’m sure it was a fun race for the fans to watch and it was a fun race to win, for sure.”

After a week off, Troy Lee Designs/Red Bull KTM Factory Racing’s Pierce Brown and the 250SX Eastern Regional division lined up once again before taking on the season finale East/West Showdown on Sunday. Brown had a great day, earning a solid third-place finish in the heat race to transfer with ease into the Main Event. In the Main, he got off to a great start and put his KTM 250 SX-F into podium contention for the first half of the race before ultimately securing a fourth-place finish for the day.