Webb on a podium at Tampa 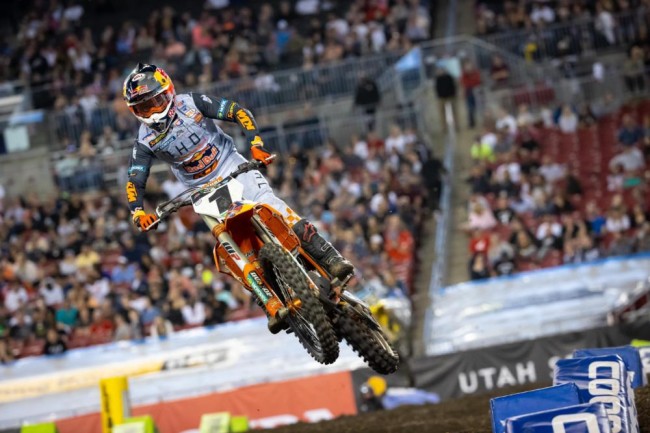 TAMPA, Fla. – Red Bull KTM Factory Racing’s Cooper Webb raced his way to a second-place finish on Saturday at Round 7 of the AMA Supercross Championship in Tampa, Florida.

Following a big win last weekend, Webb came into Round 7 with great momentum as he looked for a second-straight victory in the sands of Florida. He secured a fourth-place qualifying position earlier in the day aboard his KTM 450 SX-F FACTORY EDITION, where he carried a favorable gate pick into 450SX Heat 1. He got off to a top-four start and quickly made his way into third early on, where he ultimately secured a top-three finish in the heat.

In the Main Event, Webb got a top-five start and he passed his way into fourth on lap three. Just after the halfway point, he powered his way into third and he put on a late charge to bring himself within striking distance of the second-place rider. From there, Webb was able to capitalize on a mistake by the rider ahead to claim the second-place position late in the race and he carried it strong through the checkered flag.

Cooper Webb: “It was tricky all day and it was easy to make mistakes out there. I’m happy with a second, obviously I wanted to be up there for that win tonight, I felt great all day but it’s a good night overall. I felt like I rode good and I just need to be better on my starts.”

Troy Lee Designs/Red Bull/KTM Factory Racing’s Brian Moreau was set to make his 250SX East debut on Saturday but he had an unfortunate crash during the day’s free practice, which kept him sidelined for the remainder of the evening.