Webb: It has been a big adjustment for me 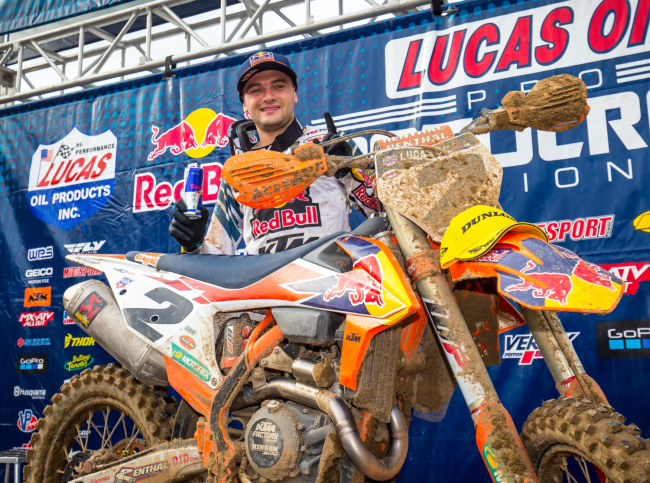 Cooper Webb hadn’t quite hit the heights outdoors he had indoors this season but, at Millville, Webb finally got a moto win and then immediately followed it up with another to go 1-1 for his first ever 450 outdoor win.

He commented: “It’s great to get be up front again and to get a win is incredible. I hadn’t even had a podium overall so it was nice to do that and be up front today, it was awesome.

“I was feeling good ( in race two) and was able to catch him (Roczen) at the end and get him with two to go, to have a 1-1 score was incredible. I knew if I could dig deep he maybe couldn’t go the full distance, I really just wanted the moto win,” before admitting that the first moto win was, “a huge confidence gain.”

Webb also opined on his relatively slow start to the outdoor season, saying: “When you do so well in supercross you expect to do similar in outdoors but it was a whole new game. It was a lot of learning for me, starting with setting up the bike and getting motos underneath me, it has been a big adjustment for me.

“The class is stacked this year, especially those first couple of races, I feel like I was riding really good and going 6-6. We keep improving and keep getting better, I feel I am in a good spot where I have learned my body, the bike and doing a full season and how outdoors work on a 450 a little bit.”

The supercross champ also feels that some rest and recovery on the weekend off helped him mentally to come in fresh to Millville. “I think the biggest thing was last weekend I was really able to unwind and recover and I think that was the biggest thing for me. We figured a little bit out with the bike this week, I feel I just came fresher mentally and came in recharged a bit.”

Webb is now 54 points behind leader Tomac and lies fourth place in the standings, but if Eli has any issues, with four rounds to go and Webb back on a confidence high, he may not quite be out of an unlikely title assault if things go his way.