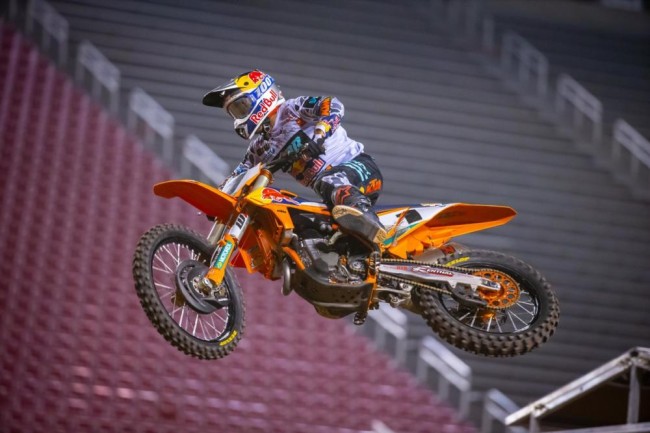 Cooper Webb says running up front with Zach Osborne felt like another day in Florida – and then he saw ElI Tomac closing in!

Webb and Osborne are of course training partners at the Baker’s factory and Webb ran in second behind Osbonre for most of the main event, but when he saw Tomac closing in, he admitted that prompted him to make the move.

“It felt like another day in Florida but just on race day, he had a great pace going and I knew would lay it all out there. I felt like our pace was really good and he was riding well. Late in the race I saw Eli was inching closer and closer. I felt I needed to make a pace and avoid him catching me. I felt like I needed to get going. I was able to make the pass and tried to break away but Eli got around him and really put the hammer down. So far it’s been two good days of racing and looking to keep the ball rolling.”

The defending champ also reveals he enjoys the strategy part of a main event. “Racing is, I feel especially with the long main events, it is a bit of a chess match. It’s a long main, it’s one of those things, depending on what position you are in, you take what you got and go with it. I was obviously stoked with how I rode and how I handled the race, Eli was obviously riding strong so I knew I had to hold it down and make it happen. “

But says he doesn’t do anything different to prepare for the higher altitude saying you just have to keep going when it hits you! ” I have just been doing my normal things, training like normal. You definitely notice it, but I think it’s something you just push through knowing it’s going to affect you a little bit.”

Webb was a alson one of a number of riders to say he enjoys racing mid-week and isn’t doing much in between the races: “I quite enjoyed it, I didn’t ride dirt bikes or anything, I went and played golf and did a bit of cardio. I actually enjoyed it. It didn’t really feel like a Wednesday, it felt like a normal race but waking up today Thursday it does feel a little weird. Overall it’s a different program to what we are used to, we are used to a lot of days in between but I quite enjoyed the quick turnaround, it was nice.”

However, while the enforced break helped his body Webb says he misses being able to race the East Coast events with softer dirt: “It was definitely a help (the break in racing), at that time I was definitely struggling with the body. I think the biggest thing was to be able to look back and realise what I was doing wrong and what I need to be better at. but at the same time I really enjoyed those East coast style races with the soft dirt and the ruts, it’s definitely opposite to that here so far but I am pretty stoked with how I’ve been able to adapt to this hard packed stuff for sure.”

But with a mud race a possibility on Sunday, Webb might get the ruts he wants after all!