Watson on his British Championship title! 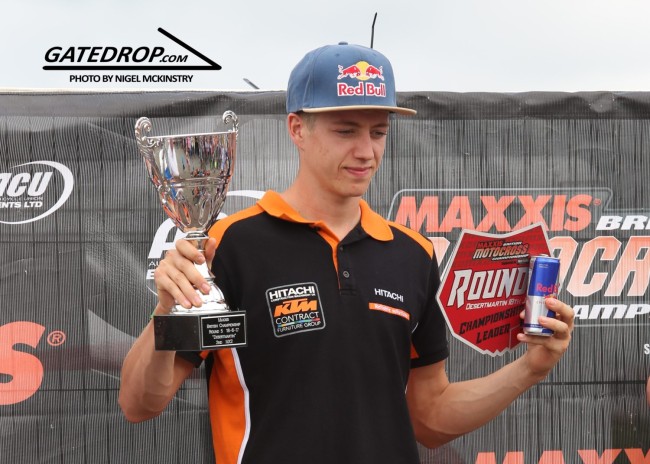 In a brilliant display of controlled and calculated riding, Hitachi KTM rider Ben Watson won this year’s Maxxis British Motocross championship at the sandy Preston Docks venue – with a round in hand.

The weather was kind to the riders, organisers and spectators alike, as the forecast rain stayed away and the overnight downpour had no effect on the excellently prepared track.

USA rider and GP rider Darian Sanayei got the holeshot at the start of the first MX2 race with Ben’s team-mate Josiah Natzke in second and Ben third. The Hitachi KTM team’s third member, and hero from the last round at Blaxhall, Todd Kellett was involved in a first turn crash and was left at the back of the field.

The running order of the top three remained the same until the halfway stage when Ben slipped up the inside of Josiah and set after the leader Sanayei. Ben’s main rival for the championship, Martin Barr, had a mid-pack start but was by this point up to fifth and on a charge. While all this was happening, Todd was up to 18th place on a track that is notoriously hard to overtake on.

As the two laps to go board came out, Ben powered past Sanayei for the lead and his seventh race win of the year so far. Sanayei was second, just under six seconds behind Ben, with team-mate Josiah hanging on for third place. With Barr struggling to a fourth place finish, the championship was slipping from his grasp.

The fast starting Josiah Natzke got the holeshot at the start of the second race from Ben, Sanayei and Harri Kullas. Barr was in ninth and with the team’s third member, Todd Kellett in 11th place.

The running order stayed the same for the first five laps until Josiah made a small mistake letting both Ben and Sanayei through and into the lead.

The pace was hotting up and the excitement and tension was building at the riders reached the halfway point. Sanayei put Ben Watson under a lot of pressure for the lead, but with Ben’s main championship rival Barr back in eighth place, the calculating Watson let Sanayei win this battle, settling for second place to become this year’s MX2 British champion.

Kullas was a distant third from Barr, Hitachi KTM Josiah Natzke, Mel Pocock and Todd, while the overall round went to Sanayei from Ben, Barr and Josiah.

In the championship, Ben has an unasailable 53-point lead over Barr with the final round coming up at Foxhill at the end of August.

Other KTM finishers of note were Brad Anderson’s second place in the MX1’s on his Verde KTM and Ben’s big enduro world championship riding brother Nathan who was third – a fantastic result for the Watson family.

The team’s next outing will be this weekend at the Belgium MXGP at Lommel.

“I am completely overwhelmed with it all at this very moment, but it’s great to release the pressure of winning the championship with a round still to go – as it would have been terrible to have to wait another month to win it. Riders always say this after a win, but I have to say it to because it’s true; that I couldn’t have done it without the team effort and I must say a big thank you Hitachi KTM, Red Bull, and the Contract Furniture Group – and all those who stood behind me and had faith in me after spending most of last year being out of racing with a broken foot. And, of course, I have to thank my Mum and Dad who travel the world with me supporting and encouraging me and I wouldn’t be here today without them.”

“The year has gone the way we wanted it with Ben winning the championship, as we knew he could from the start. It was a great disappointment when Jake (Nicholls) had to drop out of the MX1 series after two round after being injured in Italy, because we were hoping for both championships, but lady luck wasn’t on Jake’s side with the injury from which he is fully recovered from now and we hope to see him back on track before the season has finished. But fair play to Ben who rode well and with his head all year. Despite some issues we had to work through in the earlier rounds, he showed his class today and did what he had to do to win the championship and we can’t be happier. This is the eleventh championship the team has had since 2008 for KTM and we hope in some way we have repaid their faith in us and we are looking forward to next year with a stronger team and more success.