Watson on a podium, Geerts on home GP heartache 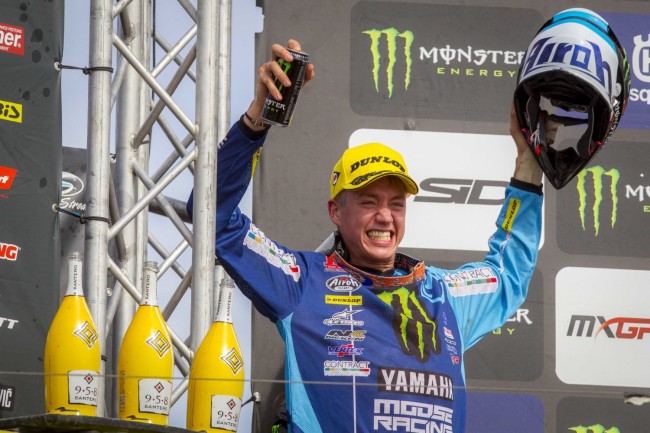 Monster Energy Kemea Yamaha rider Ben Watson celebrated his return to racing with his first podium (third place) of the year, at round 14 of the FIM World Championship in Lommel. Team mate Jago Geerts was hit by bad luck: a technical problem kept him off the podium.

Race 1 couldn’t have started worse for Geerts. Jago was tenth in the first corner, got hit by another rider and went down. He was dead last (33rd) and had no other option than start a catch up race at the brutal sand track of Lommel. And he did! The Belgian was flying on his YZ250F. On the first lap, he already passed 16 (!) riders. Geerts was unstoppable. Eighth after three laps, fifth after six laps… And he kept going like a rocket and passed Sterry and Vialle to take second position. Only championship leader Prado stayed out of his range.

Geerts wasn’t the only Monster Energy Kemea Yamaha rider with a heroic performance. Ben Watson, who was on the bike only two times last week after his hand injury, started in seventh position and quickly moved up to fifth place. After being passed by Renaux the Brit seemed to be on his way to sixth place, but he showed a lot of perseverance in the end of the race and managed to recapture the fifth place on the Frenchman.

Jago Geerts only needed a couple of laps in race 2 to move up from tenth to second place. The teenager – cheered on by a lot of Belgian fans – was on his way to the second place when he was stopped by a mechanical issue, three laps from the end. That allowed Watson – who was involved in a battle with Vlaanderen almost the entire race – to finish third in race 2 and third overall. His first podium of the year.

“What can I say? I’m really disappointed. My speed was good. I crashed in the first race and came back strong for second position. In the second race, I didn’t get the best start, but I moved quickly into second position and was riding good until I had a problem with the bike and I couldn’t finish the race. I just want to thank the fans and all of the people that supported me this weekend.”

“I lined up in Lommel with no expectations at all, because I didn’t race the last six weeks. That period was really difficult for me, but I learned an important lesson: stop putting too much pressure on myself. So, I decided not to focus on the results. For me, it’s important to have fun on the bike. And I had fun this weekend. To be honest: it’s a big shock for me to be on the podium.”

“I have mixed feelings. On one hand, I’m very happy for Ben. To finish on the podium in his comeback race, is incredible. He really impressed me today. On the other hand, I feel really sad for Jago. He was so strong. His first race was phenomenal. And also his second race was superb, until the bike broke down. A big bummer. For the entire team, but especially for Jago.”