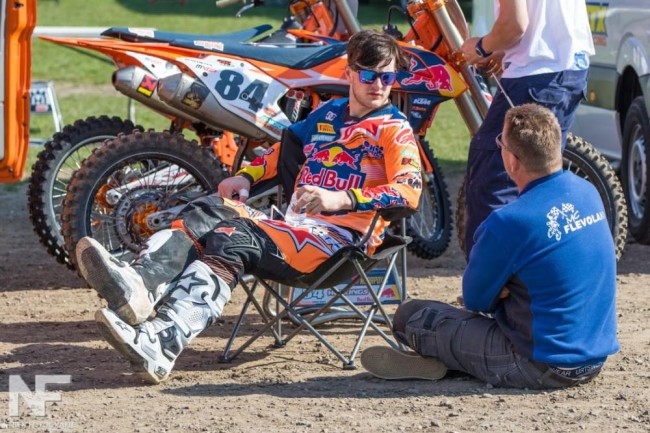 Todd Waters recently spoke with the guys at Gypsy Tales to talk about his time in Europe whilst contesting the MXGP World Championship. The Aussie had some good stories and especially regarding Jeffrey Herlings and how good he is on a Motocross bike.

One story at Lommel particularly blew Waters away.

“Man, at 2008 we were at Lommel, we are just training. I pulled up beside the training mechanic and Jeffrey comes around, it looks like he’s on a different track. We are sitting there and it’s just before the finish, there’s waist deep bumps, it’s gnarly during the week, he just comes around with two feet on the pegs, he wheelies the bumps around the corner and then he picks up it half way down the straight, wheelies and then there’s two massive bumps. He just picked it up and had to go 15-20 metres, I’ve seen lots of people ride and thought it’s cool but that was just like, my jaw just dropped. He jumped so far, landed perfectly. I was like, I’m just going to do that today, work on this section and do that. I was there, I think it was a couple tanks of fuel just trying to do it, I couldn’t even get my front wheel to it. I was just blown away”, Waters told Gypsy Tales.

Waters also remembers riding with Herlings at Lelystad during his time with Ice One Husqvarna when Herlings was an MX2 rider and they were pretty similar. However, when Waters got another chance in the GP paddock a few years later for HRC Honda, he went back to the same track and Herlings was ten seconds quicker than him. It shows not only is Herlings fast at the races but he also rides with the same intensity during the week.

“We were riding this hard pack track in Holland (Lelystad) in 2014 I was riding there and he was on the MX2 bike, we weren’t so different at this basic kind of track. I went back to that track (during his last stint at the GP’s). There was a top rider there, I think Paulin and I was only a second and a half off him. I remember feeling good and I said to the practice mechanic, “What’s Herlings do around here?”. They were like he’s 10 seconds quicker. It’s not a track to be 10 seconds quicker on, like I said I was only a second and a half of a guy doing good. It’s a practice day, it’s smooth and I was at the van just thinking, ten seconds? I’d love to see that. Anyway, Herlings turned up towards the end of the day – boom, 10 seconds quicker. I was thinking this guy is just incredible”, Waters added.

We got in touch with Ed Brons who owns the Lelystad track to get his thoughts on Herlings who rides there quite often as there’s not so many hard pack tracks in the Netherlands.

“It was the Tuesday before the MXGP of Russia. Todd was training well, but Jeffrey is at home with the track of McFlevoland (Lelystad). A typical day of training at McFlevoland, Jeffrey starts out the day calm and controlled. Picking his lines, working on his rhythm. The last five laps of his last session of the day, with a rough and rutted out track, Jeffrey plans to attack his own track record of 1:35,6”, Brons told GateDrop.com.

“A track like McFlevoland, with lots of different style corners, lap times are decided by corner speed and that’s where Herlings shines. His corner speed is phenomenal. Just look at the AMA at Ironman, Jeffrey was railing corners, earlier on the gas than anyone else at the track. I remember when Jeffrey first came to McFlevoland. He was just 17, the MX2 World Champion and eager to improve his hard pack skills. With his determination and riders intelligence he improved to become not only the king of the sand, but the all round king”, concluded Brons.

You can watch the full video with Waters thoughts – it really is fascinating listening to him talk about Herlings:

A small clip of Herlingss around the Lelystad track: