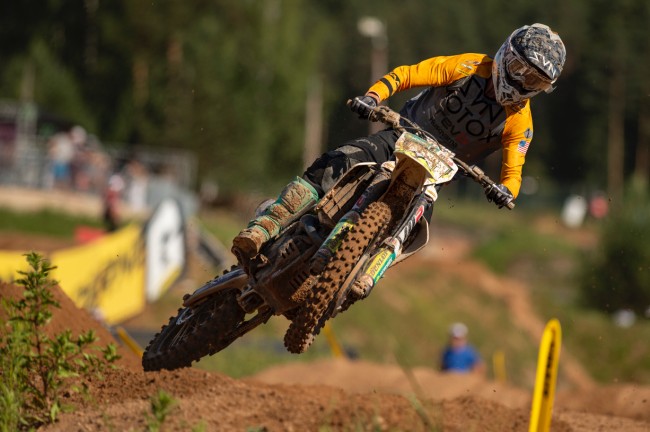 The latest stop on REVO Husqvarna UK’s intensive race programme was the MXGP of Latvia at the Baltic State’s Kegums sand circuit.

Both Alvin Östlund and Dylan Walsh failed to record a good time in timed practice but in the qualification race Alvin fought his way to a great 10th-placed finish on his FC 250 with Dylan coming home in 15th.

Despite a mid-pack start in Sunday’s first 30-minute plus two lap moto, Alvin advanced from 17th after the opening lap with a couple of late passes earning him 11th to equal his season-best finish.

Dylan strung together a series of early passes and was running just outside the top 10 in the first half of the moto before dropping to 13th.

Both riders got much better starts in race two. Dylan held an initial sixth but the exertions of the opening moto started to take their toll and he dropped back to 19th for 17th overall.

Alvin struggled to get up to speed in the opening laps and lost a number of places before regrouping and climbing back up to 14th which gave him 12th overall.

Next up is the MXGP of Germany at Teutschenthal this coming weekend.

“Timed practice on Saturday wasn’t great which is something we need to work on. Dylan faded a little bit in the qualifying race but I know he didn’t want to take any risks and Alvin went really well to be fair and he was going good – 10th was a great finish and other than Argentina it was his best qualifying result of the year.

“Both struggled out of the gate in the opening race on Sunday but rode well. Dylan passed a fair few people on the first couple of laps and got up as high as 11th before losing two places in the closing stages. Alvin was solid – he just still needs to work on his intensity at the start as he seems to drop back before going forward – but overall the first moto was positive.

“In the second race both Dylan and Alvin had great starts and were running just outside the top 10 but Dylan seemed to hit a wall and he dropped a considerable amount of time each lap and faded back through the pack. There’s no issue with his speed so we’re working on his diet to make sure he’s properly fuelled-up and has the strength to go the distance and be consistently fast for a full 30-minute moto.

“Alvin rode strong and we’re happy with 12th overall. He was held up for quite a bit in race two but it’s been a positive weekend for him and it was great to see him battling – hopefully we can go for a top-10 finish next weekend in Germany.”

“It’s been the best weekend so far for me. I’m a little bit disappointed about the results because I was feeling good and riding well but I know that I still need to work on the first two laps.

“I think I lost something like six places on the first two laps of the second race after a better start than race one so that was not good. Still, I was riding good and it is my biggest score this year so I need to be happy with that. It has been a step in the right direction.”

“It’s been a difficult weekend. I’m not a big fan of this track and I just struggled. I got a great start in race two but I felt pretty spent from the first moto when I made a lot of passes.”