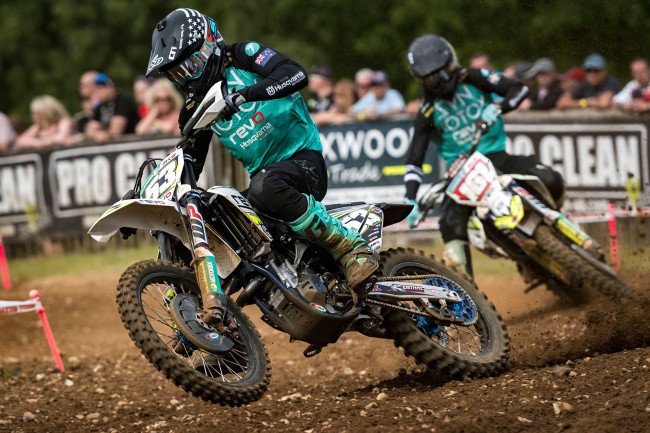 REVO Husqvarna UK’s Alvin Östlund went into round four of the Maxxis ACU British Motocross Championship with the series leader’s red plate in MX2 but it was his team-mate Dylan Walsh who left Blaxhall on Sunday with the points advantage.

Alvin qualified for the points-paying races in second – two places ahead of Dylan – and in the opening moto strung together a series of passes to move into the lead on lap five before a technical problem forced him out.

Dylan started near the front and put in a polished performance to bring it home in second.

Race two saw good starts from both riders with Alvin showing great speed in his preferred sand to fight his way up to second.

Dylan ran as high as second during the middle part of the race but slipped to third at the flag to end the day second overall – just one point behind the leader – and move into the championship lead.

Despite his DNF, Alvin sits third in the standings and is only seven points behind his team-mate.

“Both guys qualified well and Dylan had an amazing start in race one before he was pushed out wide. Alvin slotted into second, quickly made his way into the lead and was gapping the field until he suffered a technical issue and had a DNF but Dylan brought it home in second.

“In the second race both riders got a good start and Dylan quickly moved into third. Alvin was pushing hard and made his way into second which he held to the flag. Both rode really well but overall it was a bitter-sweet day so we’ll go home, regroup and get on with it.

“We’ve still got four rounds to go and, fingers crossed, we could end up with a 1-2 in the championship which would be amazing.

“The whole team has worked very well today and I’m proud of the effort we’ve put in and the way Alvin and Dylan have performed. They deserve to be running at the front.”

“It’s been a solid day for me. Obviously, every time I race I want to win – I didn’t quite manage that today and came up short by just one point but I’m happy to go to a track for the first time and leave with the championship lead.

“There are four rounds left and I’m where I wanted to be at the start of the season although it’s closer than I’d have liked.

“Still, almost every track is new to me and I’ve got to be happy with how quickly I’m learning them. My starts have been good today which set me up for a solid overall result.”

“The first race was a shame because I was riding very good today and had great speed. I was maybe 10th at the start but worked my way into the first position and was leading for more than half of the race when I had an issue with my bike but this is motocross and things like that happen.

“For the championship it wasn’t good but at the end of the day I’m only seven points behind so it’s still open. In race two I didn’t get the best start but I got up to second after maybe 10 minutes.

“It’s very close and I will do my best to close it down and take back the red plate.”