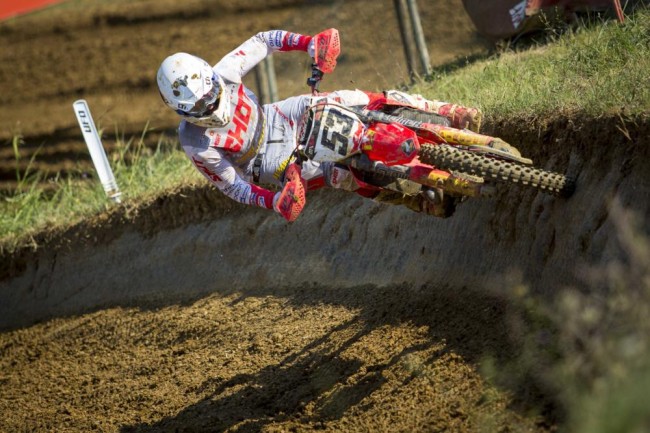 The third and final round at the hillside Monte Coralli track saw the world’s best motocross riders line up one more time in hot Faenza. In the fourth MXGP participation of his career JM Honda Racing’s Dylan Walsh underlined his potential with an inspired opening moto. Because the second moto didn’t go according to plan Walsh had to settle for 19th overall.

Walsh had a solid start to his day. After recording the eighth time in free practice he went on to record the 20th time in time practice, his best MXGP qualifying result so far. In another great display of his starting prowess the CRF450R-mounted Kiwi crossed the holeshot line second right behind Jorge Prado. Although he was edged to the outside to the exit of the corner Dylan was able to run top-10 pace for almost half of the moto. Walsh fought hard for the 30 minute plus two laps duration of the race to finish 17th.

Moto 2 didn’t get underway like Dylan wanted but the British MX2 champion put his head down and climbed up from way down the field to 15th. Unfortunately a crash prematurely ended his second race. Not what he nor the team had in mind but the spectacular MXGP rookie definitely caught some attention this week and Faenza was an encouraging step on what was a very specific type of track.

Artem Guryev concluded his last Faenza race day on a positive note too. The likeable Russian is improving every round and reached his best result of the season, 26th overall, after 24-25 moto scores.

The MXGP world championship is set to continue on September 27th in Mantova, Italy where JM Honda Racing will attack the next triple header packed into one hectic week of racing.

Dylan Walsh: “This was a step in the right direction, I feel. I had a really good start in moto 1 and ran with the top-10 guys for a really long time. I made some good passes and picked up the pace of that group pretty well. With the level being so high I got a bit tired near the end and finished 17th. The rider on the left of me jumped the gate which caught me out a little. I worked my way up to 15th early on when I crashed and my bike got stuck in the fence. It got me so much time to get the bike out of there that I was already lapped once I could continue so I DNF’d.”

Artem Guryev: “We changed a couple of things on the bike which definitely helped to get a better feeling and improve my riding. I was not lucky with my starts today so that made it even harder. I kept going and managed 24th in the first moto but I had a crash while battling some other riders on the the first lap of the second race. Physically I’m still catching up but at least it’s getting better and better each time. I’m happy that I’m fully fit again so we can start building up for Mantova.”