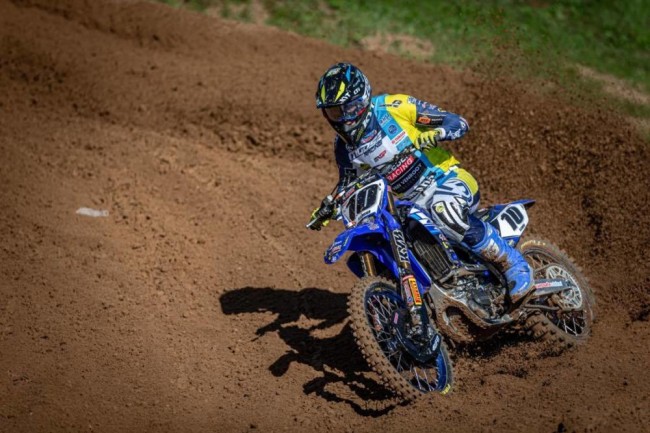 Due to the COVID-19 pandemic there was a five months break in the MXGP World Championship calendar, but we finally got back to racing during the weekend in Latvia. The Kegums circuit presented a challenging track for the riders with plenty of breaking bumps to navigate through as well as the hot temperatures not making it easy for the riders.

Due to COVID-19 restrictions etc, the format for the World Championship has changed to a one day format meaning riders have to qualify through timed practice instead of a qualifying race.

It was a great start to the day for Calvin Vlaanderen who qualified sixth for a good gate pick which is important at the Kegums track. Alessandro Lupino qualified in twenty-third but just over four seconds off the pace as the times were close. American, Thomas Covington qualified in thirty-fourth position.

There’s no doubt that Vlaanderen has a lot of potential and he showed this during the first moto in Kegums as he got a start just outside the top ten in eleventh. The MXGP rookie got demoted by the experienced Cairoli and Van Horebeek but continued to battle and ended up passing established MXGP rider, Clement Desalle to come home in a solid eleventh – something to build on.

Italian, Alessandro Lupino did not get a good jump out of the gate as he was buried in twenty-sixth but he made moves. In the end he had to settle for twenty-first just missing out on points in what is a stacked MXGP field. Covington would end up in twenty-eighth as he continues to adjust to the GP tracks after a year in America.

In the second moto, Vlaanderen was caught in a first corner pile up which saw him in virtually last. With the track at it’s roughest, he clearly excelled in difficult conditions passing riders left, right and centre, Vlaanderen ended up a strong twelfth and not a million miles behind the established Gautier Paulin. It was a positive GP for Vlaanderen ending up eleventh overall and most definitely a step in the right direction.

After the disappointment of not picking up points in the first moto, Lupino put that behind him and came home a solid fifteenth resulting in seventeenth overall which should give him confidence heading into round four of the series. In what was a tough GP for Covington, he ended up twenty-ninth in the second moto and will hope to improve as the season progresses.

The next round of the series takes place on Wednesday at the Kegums circuit which is expected to have some modifications made to the track.

Calvin Vlaanderen (11th overall): Overall I am satisfied with the results from today. I still feel like I can improve a lot more, but we take it step by step. First moto I put way too much energy into passing riders the first 2 laps and got burnt out. Second moto I was involved in a start crash and managed to fight back just outside top 10. We will take these next 2 days to recover and then we go again on Wednesday.

Alessandro Lupino (17th overall): Happy to be back on racing but I was little bit too stressed out. I was not riding free and only in the second moto I had fun and I was riding well. I enjoyed it a lot and am looking forward to racing again.

Thomas Covington (31st overall): Today was difficult for me on a really rough track but we’re going to make some changes and just try to keep progressing each race.