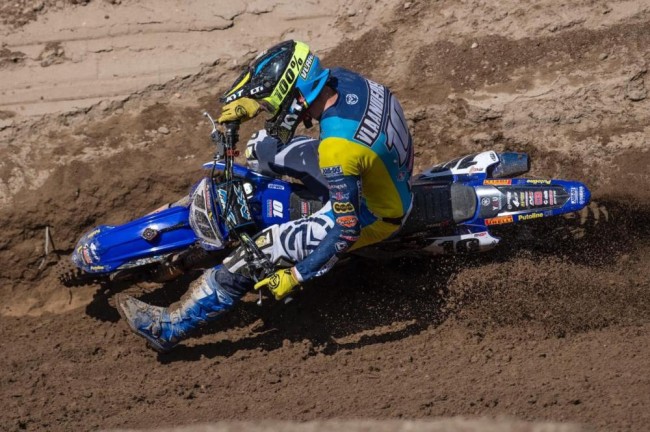 After a weekend off, the Gebben Van Venrooy Racing team were excited to head to Mantova in Italy for another triple header of MXGP World Championship racing. With the team making improvements and good strides forward recently they were hoping for some more good results at round nine of the MXGP World Championship.

Things started off well for the team with Alessandro Lupino and Calvin Vlaanderen setting the eighth and eleventh quickest times respectively during qualifying to give themselves a good gate pick heading into the moto’s.

When the gate dropped for race one, Vlaanderen was able to take advantage of his solid gate pick as he came around the first corner in sixth. The MXGP rookie was not content with that though and looked comfortable battling with the established MXGP riders. On lap five Vlaanderen passed Bogers to move into fifth which is were he finished. Considering the amount of factory bikes in MXGP, a top five moto result for a factory team is very impressive and Vlaanderen was one of the standout rides in race one.

Alessandro Lupino was having a good moto himself and eventually came home in eleventh to show what he can do in sandy conditions. The Italian beat plenty of factory bikes himself. It was a tough race for Thomas Covington at a rough track – he battled hard to end up in twenty-sixth.

Unfortunately, in the second moto, Vlaanderen couldn’t replicate the good start he had in race one but sitting in thirteenth after the first official lap wasn’t so bad. In the end he made up another two positions to cross the line in eleventh to secure seventh overall – his first MXGP overall in the top ten so it was a very positive day for Vlaanderen.

Lupino put himself in a better position after getting an improved start in race two as he was sitting in eight on the opening lap – a position he held until lap seven. The Italian was sitting eleventh just ahead of team-mate Vlaanderen with two laps to go but unfortunately, he hit his foot on the ground and as a result has ligament damage in his ankle – very unlucky considering he didn’t even crash! The experienced MXGP rider will get more checks done to see the full extent of the injury. Covington improved his speed in race two and had a better result coming home in twenty-fourth but he’ll be looking for more championship points at the future rounds.

The tenth round of the MXGP World Championship takes place on Wednesday at the tough Mantova circuit.

Calvin Vlaanderen (7th overall): Today was a good step in the right direction. I am very happy with my riding and my fitness, I’ve improved since Faenza. During qualifying I didn’t feel so sharp out there. I got bad arm pump so it was tough to put in a good lap but eleventh was quite good. In the first moto I managed to come out from the start in the top six and rode a solid race. I didn’t feel great but I just hit my marks and stayed out of trouble, I felt smooth. In the second moto, I made some wrong choices during the first couple of corners and was buried quite far back. I picked off a few riders and felt the speed and fitness was good. I came back to eleventh so overall to get my first race in the top five and my first top ten overall, I am super happy. I want to say a big thanks to the team for their hard work – let’s stay motivated, there’s many more good races to come.

Alessandro Lupino (16th overall): It was a good day, I was riding really good. I am happy that the team were also doing good with Calvin, he was fast! I was hoping to finish the day in the top ten but on the last two laps I hit my foot on the ground and broke ligaments in my ankle. I need to have more checks in the next days to see how it is going for the races. I hope to be back on Wednesday!

Thomas Covington (26th overall): Tough day at the office for sure. It just took me a long time to get comfortable on the track today. Unfortunately, I had no choice but to miss a bit of bike time the last couple weeks and that definitely didn’t help things but we made a few adjustments before the second moto and I then started to feel better out there. We have two more chances on Wednesday and Sunday.