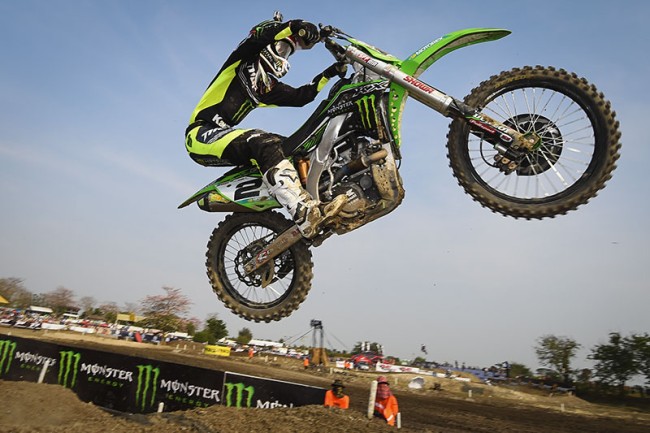 NAKHONCHAISRI (Thailand), 07 March 2015 – It was a scorching start to the second round of the FIM Motocross World Championship, no pun intended, for Monster Energy Kawasaki Racing Team’s Ryan Villopoto and Red Bull KTM Factory Racing’s Jeffrey Herlings as they both dominated their qualifying race heats in scintillating fashion.

Meanwhile, Yamaha MXFontaracing’s Kiara Fontanesi banked her first twenty-five points this year, after bouncing back from a first turn pile-up to dominate the first race of the second round of the FIM Women’s Motocross World Championship.

The show was well and truly stolen today when Monster Energy Kawasaki Racing Team’s Ryan Villopotoheld a tight line around turn one, nabbed the holeshot and went on to obliterate the field for one of the most convincing qualifying heat victories we’ve seen in a while. Rockstar Energy Suzuki World’s Clement Desalle rode cool, calm and collective for an unchallenged second while the battle for third was where the real race shaped up.

In the early stages Red Bull KTM Factory Racing’s Tommy Searle bashed about with teammate Ken De Dycker and the MXGP red plate holder Red Bull IceOne Husqvarna Factory Racing’s Max Nagl for third but ended up crashing a few laps in which dropped him back to tenth.

While De Dycker and Nagl bickered over third they found themselves welcoming Team HRC’s Gautier Paulin to the party around mid-moto. Paulin was absolutely hauling after a less than mediocre start left him well outside of the top ten on the opening lap. After slicing through the field at a rate of knots, Paulin made light work of both Nagl and De Dycker to take over third. With Paulin opening the door in the race against the giant Belgian De Dycker, Nagl followed him through to take over and finish fourth. De Dycker managed to finish fifth while Villopoto’s Monster Energy Kawasaki Racing Team’s Tyla Rattray rounded out the top six.

As for the eight-time FIM Motocross World Champion, Red Bull KTM Factory Racing’s Antonio Cairolimanaged to bounce back to eighth after going down on turn one.

As Herlings went on to dominate, effortlessly controlling the race for his second consecutive qualifying heat victory this year, the freight-train of riders behind him went bar to bar for second. As one of the most improved riders this season, Jonass had a firm grip on second despite an early race challenge from Seewer who ended up stacking it on lap three and dropping back to sixth.

With Seewer down, the Kawasaki boys Ferrandis and Tixier were able to take advantage and move up into third and fourth with only a flicker of red in the form of Gajser breaking up the green. With third place up for grabs the trio Ferrandis, Tixier and Gajser impressively threw their supercross skills on the table when they started tripling in to the rhythm section, a jump that not even the MXGP riders were doing.

After tossing third about between themselves for the majority of the race, when the checkered flag was waved it was Gariboldi Honda’s Tim Gajser who managed to secure third behind the hauling Red Bull KTM Factory Racing duo of Jeffrey Herlings and Pauls Jonass.  Monster Energy Kawasaki Racing Team’s Dylan Ferrandis finished up in fourth while his teammate, the defending MX2 world champion Jordi Tixierrecovered from a small crash at the end of pit lane for fifth.