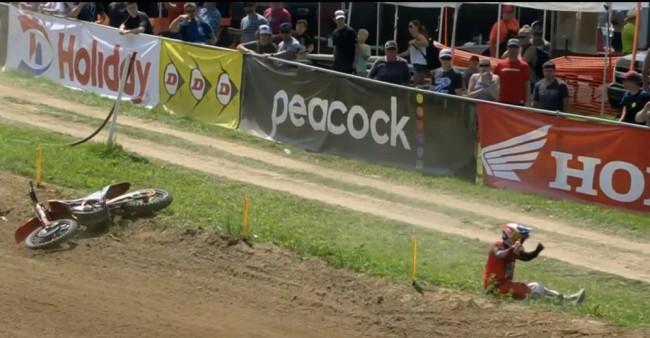 Cooper Webb had a lucky escape after he tagged rear wheels with Chase Sexton in the air at Millville and went down – even though he almost saved it! Webb, who had been battling for a top five, eventually got up and tried to finishthe race but was out of the points with a bent bike and ultimately DNF’d.

Webb said of his day:  “It was an up-and-down day for me. I ran up front for a bit in Moto 1 but I kind of lost some ground early on. I made a real charge at the end to almost get Plessinger for fifth, so I was pumped on that. Second moto, I was trying to get into third to hopefully set myself up for an overall podium but I had an incident with another rider and I ended up crashing pretty bad. It took me a while to get up and I’m glad I’m okay, just a little sore, but the bike was super bent up so I wasn’t able to finish.”