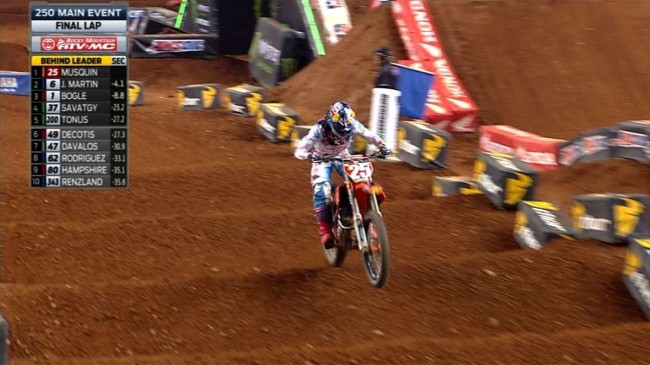 France’s Steven Lenoir made a solid MXGP debut this weekend in Valkenswaard. The former European MX2 champ got his fill-in campaign for the 24MX Lucas Oil Honda team underway in fine fashion claiming 15th in the second moto.

No less than 20(!) GP winners lined up at the third round of the FIM MXGP World Championship in Holland. Valkenswaard saw the world’s best MX riders return to one of the more intimidating, rutted and sandy tracks on the calendar. With literally just a couple of test sessions on the 24MX Lucas Oil Honda CRF450R under his belt Lenoir was in for a tough challenge. Especially because this was not only his first ever MXGP event, it was also his career-first 450 race and an historic first ever MXGP race for the newly formed 24MX Lucas Oil Honda squad.

When the dust had settled after a busy day one the British MX2 champion had qualified 24th. Not exactly where Steven and the team wanted to be. However it was obvious that with each session Lenoir grew more and more comfortable with both the bike and the track. On Sunday morning the 24-year old Frenchman placed 16th in warmup. The wet first moto became a frustrating affair. Limited by a weak start Steven had his work cut out. Never one to shy away from hard work Lenoir climbed up to 17th but eventually a second mistake cost him his first MXGP championship points.

In the second moto the red #685 produced a much better getaway. Circulating in a creditable 13th spot early on Lenoir confirmed his speed even when the going gets rough. On a slightly drier and faster track the 24MX Lucas Oil Honda rider hung in there to pick up six well-served MXGP points.

Steven Lenoir: “Overall I’m quite pleased with how things went. With a bit more preparation on sand tracks and more time to get used to the bike things could have been better still. The first moto my start was not so good but the speed was okay, especially the first twenty minutes. It was a pity of the two crashes I had, (smiles) definitely would have been nice to have avoided the second one! In the second moto I felt more at ease and that showed I think. I was running the speed of the top-12 before losing some positions. It was great to be back in GPs, everyone on the team worked well and I’m looking forward to the next GPs!”

Patriek Heydens, technical director: “We all knew that conditions would be quite difficult this weekend for Steven. Valkenswaard is not the type of track he’s been riding a lot on lately and stepping up from a 350cc to a 450cc capacity bike requires a completely different style. To do what he did in the second moto gives a bit of an idea what he’s capable of. It also speaks volumes about his mental toughness to pull this result out of the bag in such a strong field in his very first MXGP. Steven and the complete crew did a good job. We’ll take this as a foundation to build on.”