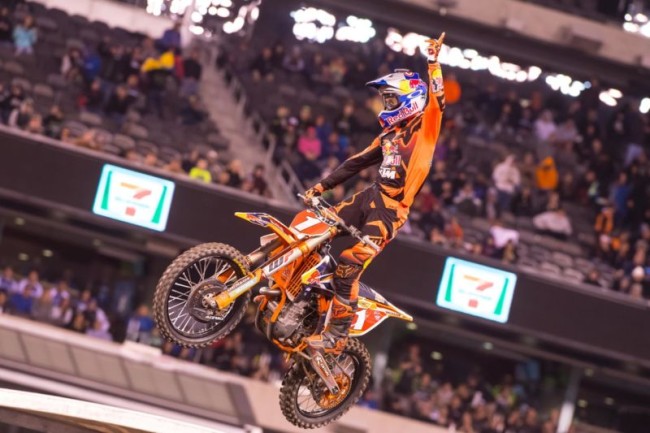 It has been without doubt Ryan Dungey’s best supercross season ever.

Dungey isn’t quite as naturally talented as a Ken Roczen, James Stewart or Jeffrey Herlings, but it is to his credit that he makes up for that with a fierce work ethic, smart riding and exemplary professionalism. Ryan Dungey is the perfect role model for all young aspiring racers and champions.

The Minnesota man has shown that when you make good decisions, get good people around you and have the blinkers on then anything is possible. This season, with the help of Aldon Baker, Dungey even managed to be more aggressive and showed that race execution is more important than race pace in supercross racing when the margins are so thin.

Week-in, week-out Dungey executed the race perfectly, he always got great starts and made the passes early and aggressively when needed. It meant even when a guy like Roczen had his speed, Dungey already had a lead on his rival and forced Roczen to ride beyond himself to get the win.

Dungey put the pressure on his rivals and forced them to make the mistakes, Ryan found the perfect balance between his renowned smooth, smart riding, alongside his added aggression and assertive early passes. Dungey’s weakness became his strength, and mid-way through his career that is a very impressive change to make. It caught his rivals off guard and left them playing catch-up all season.

Now Roczen and Tomac have hit their stride it is all too little, too late. Like Ricky Carmichael used to do, Dungey came in prepared and did his damage in the first half of the series.

It seems Aldon Baker’s help didn’t just come from the physical training, (Dungey was always fit) but more the mental confidence Dungey gained by having Aldon in his corner. With Baker’s history of training champions, Dungey fully trusted everything Aldon has said and, combined with his work ethic, that has vaulted Dungey’s confidence to the level it is now.

That mental breakthrough seems to have been the final piece of the Ryan Dungey puzzle. What we have seen this year is the best Ryan Dungey there has ever been and it is all down to Ryan’s determination and will to improve year on year. Most people would have been satisfied with what they had already achieved but Dungey always wants more and that desire has ultimately led to the now three-time supercross championship having his best season ever.

Dungey has elevated KTM to the next level in the USA. Pic: KTM/Cudby

KTM race boss and former GP winner Pit Beirer showed his admiration for Dungey’s riding this year by saying: “It was amazing to watch Ryan this year, how strong he was week in and week out, and we just want to thank the team and Ryan for what they did.”

It’s almost like Dungey has re-invented himself this year and brought KTM along with him elevating both parties success to another level in the USA. The single-minded focus of KTM and Roger DeCoster is mirrored by Dungey’s determination and dedication to succeed. You can have nothing but respect for both KTM and Dungey for their recent achievements, they are literally creating history together.

Coming from a hard-working, humble and respectful family, Dungey has kept his feet on the ground but let his ambition remain sky high, the perfect combination for any team looking to hire a top-level rider.

Now, with three supercross titles in the bag, we can only hope Dungey will try and win the most prestigious outdoor title in the world, MXGP, before the end of his brilliant career – the only major title his impressive CV omits.