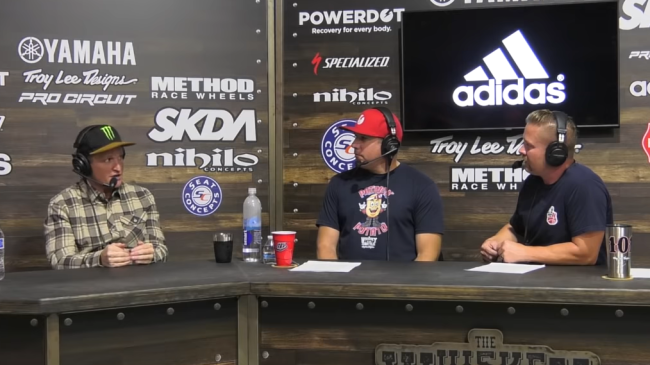 Amazingly, Ricky Carmichael says he didn’t really like riding his motocross bike growing up! Carmichael made the revelation on the brilliant Whiskey Throttle Show hosted by David Pingree and Grant Langston.

Carmichael, a five time premier class supercross champ and ten time US motocross champ, revealed he and his family lived out of a motorhome for two years as youngster when his dad moved for a job. “We raced every single weekend,” said RC of that time. “We would hunt down the competition and go race. One thing I’m really proud of, and it got me to where I am today, I was able to realise the sacrifice that my parents were making for me at a very young age.

“My parents didn’t have everything riding on me, they were going to go out and get jobs if they needed too, and they worked, and are still working. But they sacrificed enough to give me the chance and I noticed that at a very young age so honestly, I just raced for them. I hated riding,” Carmichael then admitted to a stunned audience – including Langston and Pingree!

“I liked to race but I hated practice, I would say 90% of the time. Living in Florida it rains a lot, I was praying that it would rain so that I didn’t have to ride! I didn’t mind it as much until I became pro. You gotta think, man, when you are 11 years old and your friends are having fun and you are going out there and just riding. My mum held me accountable for everything that I did on a motorcycle so it wasn’t just, go out there and ride, I went out there and rode as hard as I could every time.”

Make sure you listen to the full show here, including Pingree’s experience riding with RC and Carmichael’s mum as coach: