Video: Lawrence and Ferrandis celebrate together! 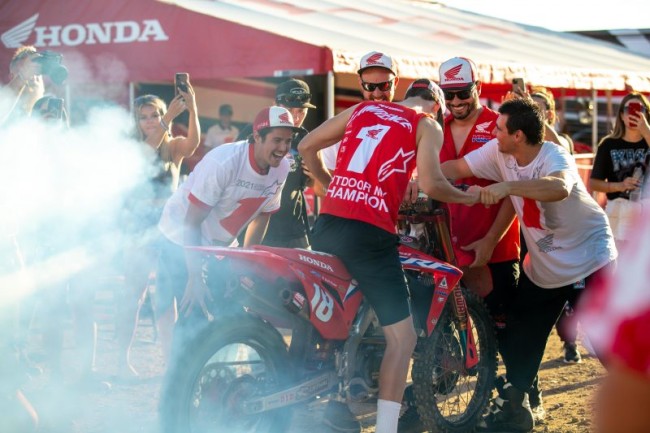 For the first time in American motocross history, a US rider didn’t win any US motocross championships, in fact only one American made the top three in each class overall! Aussie Jett Lawrence and Frenchman Dylan Ferrandis took the 250 and 450 titles respectively – and they celebrated together in style as you can see below with Ferrandis bringing his Yamaha 450 machine over to the Honda tent to join in with the party!

History made 🏆 🇦🇺 🇫🇷
First time in Pro Motocross that both championships were won by foreign riders 🤯 #ProMotocross pic.twitter.com/gjPhzRoHzn

Lawrence said of his championship win: “I didn’t ride good at all today. The practices were good, but I was ‘sleeping’ on the first-moto start and then was rushing stuff, but I got a bit of a blessing to come up to eighth. Going into the second one, the mental frame was just to go out there and do my job. I got up from the crash as quick as I could and tried to put on a charge and not override the track, because it was pretty rough. I kind of got a flow and just relaxed and made my way through up to third, which was a lot better than the first moto. It’s cool to wrap it up, but I don’t think it’s actually sunk in yet, realistically; I’m still trying to process it. I didn’t come over here for nothing; my one goal was to win a championship and since then I’ve really been working my butt off to get to where I am today. Thankfully it’s all paid off, and I can take a break and get ready for next season.”

With Ferrandis saying: “It’s just unreal to be the champion in my first year on the 450. When I was young, I dreamed of being a 250 champion, but I never really dreamed of being a 450 champion. So, it’s not even a dream come true; it’s more than that. It’s just the best thing that I have ever done in my life.