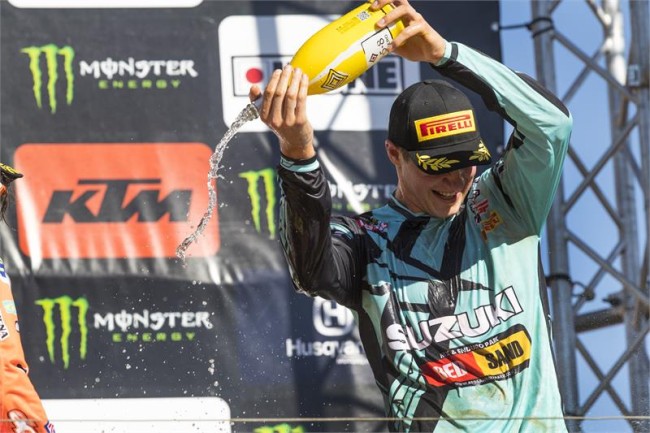 Arminas Jasikonis has been a revelation this season and got his first ever MXGP podium last time out in Portugal but the Suzuki man is excited to get back to the races after the summer break.

Jasikonis went back to Lithunia to recharge his batteries and discovered he had a lot more media activities to do since his success!

“Everything has gone well since Portugal, said Jasikonis in the latest Suzuki PR. “It’s been a little break, so last weekend I went to Lithuania to check out how the national series is doing there. Afterwards I did quite a lot of interviews with all the newspapers and TV companies, which was nice to see them showing an interest. It was good to have a little break, but I’m excited to get back to the MXGP racing. Loket is a bit of a strange track and it was actually my first ever GP with Suzuki last year so I have good memories from that. I think it will fun though and although expectations are more than they were before Portugal, I don’t want to put too much pressure on myself as I put the RM-Z450WS on the podium on a track where we had small expectations, so we want to keep that mindset really.”

The big Lithuanian is now bringing a spotlight to motocross in his country just like Tim Gajser managed to do for Slovenia, it is great knock-on effect for the growth of the sport to have riders succeeding from countries not usually associated with major world championship success.

Watch his podium performance in Portugal below: