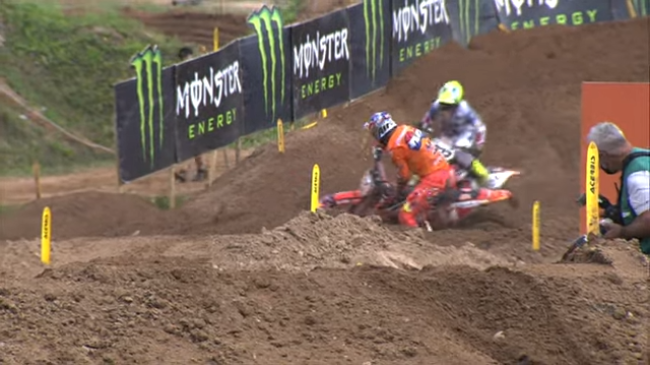 Jeffrey Herlings was on course to take the second moto victory during the MXGP of Riga and the overall but then took a small crash with three laps to go. However, Cairoli quite unbelievably crashed as he saw Herlings down and hit the deck trying to switch lines. Herlings remounted to come home in third with Carioli in fourth but it meant the 9 times World Champion took the overall!

“At one point in the waves I saw the yellow flags and Jeffrey on the floor. He picked up and started very fast in front of me and I was a bit shocked and had to brake. I lost the front wheel. I had a gap over the others so held my position and watched what would happen”, Cairoli stated in a KTM press release.

“I passed Tony and was leading up until two laps to go when my front wheel washed-away. I still managed 3rd and apologized to Tony because he might have crashed because of me! Anyway, we are both on the podium and we extended our points lead in the championship”, Herlings added.