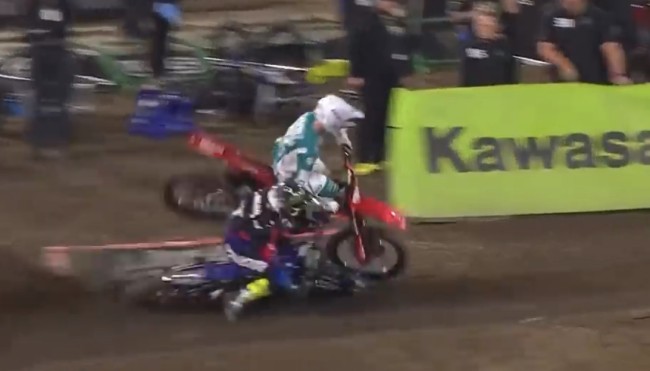 Dylan Ferrandis sent Christian Craig flying and went down himself as they battled for second at Anaheim two! Remarkably the Frenchman went on to win after passing Craig’s Geico Honda teammate, Jett Lawrence, with two turns to go on the final lap of the race!

“Maybe I hurry a little bit too much, I don’t know,” commented Ferrandis on the clash. “I tried a move on him and from my point of view it wasn’t that crazy but obviously we all saw what happened. I just came with a lot of speed on the finish line and made a big scrub on the inside, I wanted to pass on the inside and he just didn’t hear me or see me. From what I see on the pictures I almost slide, I think crash before we touch and I make him crash obviously. I apologise for that, I never wanted to make him crash, I am here in the US for four years and I never had any problems. I hope people with not get too mad about that.”